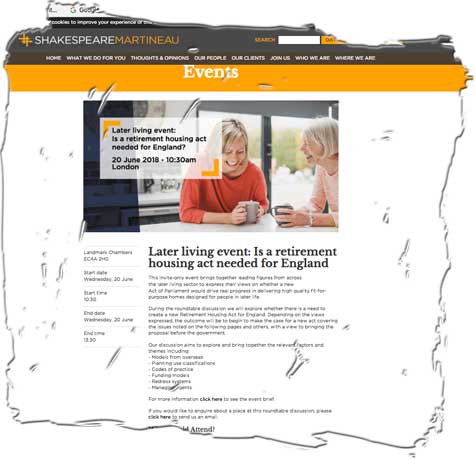 The anti-ground rent trade body ARCO has been snubbed and left uninvited by retirement housing insiders at a City law firm conference next Wednesday to discuss whether a Retirement Housing Act is needed.

This opinion has put ARCO at odds with volume housebuilders McCarthy and Stone and the McCarthy family-owned Churchill Retirement Living, which sell off the freeholds to their sites to ground rent speculators.

Both are lobbying the government hard to be exempt from the ban on ground rents which is likely to be announced next month.

Unsurprisingly, LKP is not invited either.

Private Eye this week revealed that Churchill contributed £50,000 into the Conservative Party funds in February, according to the Electoral Commission.

The invitation-only meeting next Wednesday is hosted by City law firm Shakespeare Martineau “with the support of McCarthy & Stone and Housing LIN”.

“The session is intended to bring together key figures in the later living sector for an open discussion about whether we should have a new Retirement Housing Act for England. During a structured debate we will discuss what changes are required in order to drive real progress in delivering high quality fit-for-purpose homes designed for people in later life and how a new legislative framework might assist with this.”

It is very likely ground rents will figure in the discussions, as they will at the LKP-organised All Party Parliamentary Group meeting on July 11. That meeting will be addressed by both McCarthy and Stone CEO Clive Fenton and ARCO chief executive Michael Voges.

Among care providers and new entrants to the retirement housing market there is exasperation at the historic legacy of the volume housebuilders.

Only 2 per cent of over-65s live in designated retirement housing in the UK – against 17 per cent in Australasia and 12 per cent in the US.

Repeated scandals, involving two Office of Fair Trading investigations – and one finding of collusive tendering – as well as widespread dismal re-sale prices may have contributed to undermining public confidence in the sector.

The leasehold system involving loading the freehold with income streams and then flogging it off to whoever will pay the most may also have a lowering effect on consumer confidence.

There have been improvements under the current management of McCarthy and Stone as we acknowledge here:

The largest freehold owner in the sector is the so-called Tchenguiz Family Trust based in the British Virgin Islands.

Subsequent McCarthy and Stone sales have been made to Adriatic Land, where the ultimate beneficial ownership is hidden behind nominee directors of the Sanne Group headquartered in Jersey.

For example, 21-flat Wolsey Court in Leicester was completed by McCarthy and Stone in 2016 and the freehold sold off to Adriatic Land 4.

Leasehold residents at the site are absolutely furious that their landlord, to whom they pay £495pa ground rents (rising with RPI), remains hidden.

They have been told by McCarthy and Stone that ground rents are essential to attract investors, pay for new land acquisitions, make sites viable and offset the loss of the communal spaces in retirement sites that in non-retirement blocks would be sellable flats.

It is repeated by the volume retirement housebuilders that ground rents are essential to their business model. Detractors say: change the model.

A curiosity of the meeting is that it is chaired by former civil servant Jeremy Porteus, of Housing LIN Limited and Housing LIN Enterprises Limited, which he wholly owns.

He told LKP that he is chairing in a “personal capacity” and that the event is organised by Shakespeare Martineau.

LKP asked whether Housing LIN Limited receives any public money, but Mr Porteus did not respond. 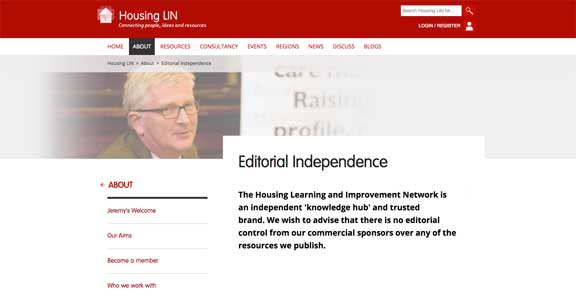