The MP for New Forest West – coincidentally not far from McCarthy and Stone’s Trump-style HQ in Bournemouth – asked in the Tuesday housing debate:

“On new build leaseholds, is my right hon. Friend prepared to consider an exemption for the retirement market where retirement living has particular requirements? Is he prepared to meet a delegation of hon. Members to discuss that?”

LKP / BetterRetirementHousing.com suggests Sir Peter Bottomley and Jim Fitzpatrick, who are familiar with the retirement housing sector, tag along to make sure this obliging bit of commercial lobbying has an alternative voice.

Last month McCarthy and Stone was claiming that it was “caught in the crossfire” of the reform of leasehold: in fact, it is one of the causes of the campaign to end them. It has even produced a leaflet arguing for the retention of ground rents circulated to putative buyers.

The company’s historic freehold book is in the hands of the Tchenguiz Family Trust, based in the British Virgin Islands, and is still selling freeholds to outfits such as Adriatic Land, which are often based offshore and hide their ultimate beneficial ownership behind nominee directors.

McCarthy and Stone has 70 per cent of the retirement housing market. 4 per cent of its revenues come from selling ground rents – £27 million last year – and they account for rather more of its profits.
The business model of Churchill Retirment, which actually belongs to the McCarthy family, is very similar.

The trade body the Association of Retirement Community Operators announced yesterday that ground rents are “not essential” in retirement housing and it backs the government in ending them. The announcement directly contradicts McCarthy and Stone and Churchill. Both have argued that they need ground rents for the viability of retirement housing projects and without them …

But other retirement housing providers including Legal and General, which are part of the Association of Retirement Community Operators, deprecate ground rents and deny that they have any purpose in the viability of retirement housing schemes.

The APPG on leasehold reform has invited McCarthy and Stone CEO Clive Fenton to address the ground rent issue at the meeting on July 11. 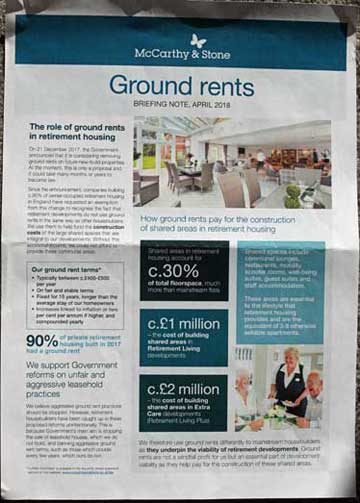 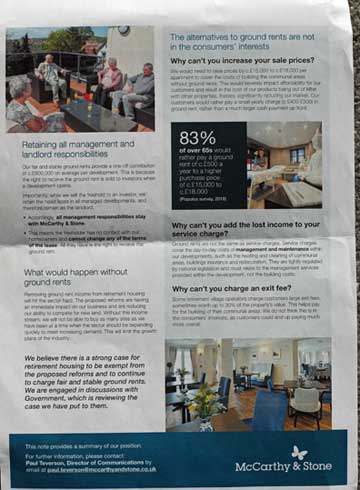