Gleeson, the housebuilder that publicly disapproved of rip-off leasehold houses, was identified in the Commons on Tuesday for introducing a raft of “fleasehold” covenants into its freehold ones.

Justin Madders, Labour MP for Ellesmere Port and Neston, who is deputy chair of the APPG on leasehold reform, spoke out about how “rancid the whole business” of housebuilding is in England and Wales.

Buyers of leasehold properties – “a staggering 92% said they were not fully informed of the ground rent terms when they bought their home” – are now “unable to sell on their property”.

“The illusion of home ownership is very real to them,” said Mr Madders. “The true owner of their property is likely to be an unaccountable, faceless investment company based offshore.”  Mr Madders then turned his attention to Gleeson Homes, whose chief executive Jolyon Harrison deplore the sale of leasehold homes at our APPG in September 2017.

“It proudly proclaims to sell only freehold properties but it has a huge number of covenants that come with the land, and it is those that come with a fee that I am most interested in.

“Permission fees are levied for extensions and so on even if people just want to put a shed in. It says charges start at £200, but it does not say what they can rise to, and perhaps most ominously it says retrospective fees can be expensive.

“I really do not know why Gleeson wants to put itself in the position of a planning authority, but the key issue is that there are numerous ways in which developers can choose to earn funds but it does not always have to be through a series of opaque charges that are not always apparent to the home owner at the time of purchase.

“We need developers to come clean with a full audit of everything that comes with the property that has an ongoing cost implication.

“The best way to do that is to undertake a Select Committee inquiry into the whole leasehold scandal so that we can have full transparency.

“There are many questions a Select Committee ought to ask. Why did developers decide to embark on this industrial-scale scam? What is the extent of ongoing charges that attach to properties? What were developers reporting to shareholders at the time they opened up this additional revenue stream?

“How did the lenders and the lawyers miss the fact that these leases might render the homes unsellable? What did those running Help to Buy think they were helping people to buy? And who exactly are the beneficiaries of those leases now?

“If we are serious about meeting the housing needs of this country, we have to get a full understanding of how the cowboys, the spivs and the speculators were allowed to hijack this vital element of national infrastructure so that it is never allowed to happen again.”

LKP today wrote to Mr Harrison asking for an explanation of the “fleacehold” charges outlined by Mr Madders.  LKP has been sent a leaflet, published in May 2017 by Gleeson, outlining to homebuyers the covenants they will still have to pay for consents at their freehold homes.

In addition, Gleeson staff have corresponded with activists in the National Leasehold Campaign Facebook group demanding an apology – from them and from Mr Madders – for his remarks in the Commons.

1/ Has Gleeson introduced these covenants on sites where local authorities have in fact adopted the common parts?

2/ Why has Gleeson not formed a residents’ management company to handle these covenants in a modern estate, rather than, one assumes, hold on to the company for some commercial gain?

3/ We all aware that there is a market in these management charges – FirstPort is an eager buyer, as is the Glasgow-based fund Greenbelt https://www.theguardian.com/money/2018/jan/06/fleecehold-management-companies-complaints-bills.

Has Gleeson Homes sold on any of these covenants / management companies?

Over the leasehold houses issue, Gleeson asserts its moral superiority to other plc housebuilders.

Is there any reason apart from this moral restraint why you would not sell off these management companies to speculators, perhaps anonymous ones based offshore, as other housebuilders do with the freeholds to ordinary people’s homes?

a/ Why is Gleeson acting as a planning authority over issues such as extensions and conservatories, with charges “starting at £200”? What is the maximum charge imposed on  Gleeson homeowners for extending “their” homes?

I note that it is more expensive to obtain retrospective consent: is this because Gleeson incurs greater costs for this service; or is it because Gleeson is in a position to demand more money under these circumstances?

b) Why is there a ban on subletting? There are often urgent, and desperate, reasons why a family might need to sublet. ie To pay for an elderly relative’s care. Most leases do allow it. Is this a blanket ban, or can consent be purchased from Gleeson? If so, how much do you typically charge? And why, apart from commercial gain, would you do so?

c) Are you entirely happy with this proscription: Gleeson customers cannot: “Do anything that is nuisance or annoyance or inconvenience to Gleeson or to anyone else on the development.”

d) I note that you emphasise “legal costs” in the event of a dispute: any number of leasehold sector game players would do the same thing.

e) After Gleeson lists a raft of measures that can be taken against homeowners who breach the covenants, it then deals with disputes concerning nuisance between neighbours, where it adds:

“Your best point of complaint if you have no joy directly with the culprit is the Environmental Health Department at the Local Authority who may ask you to keep a diary of the annoying events. They will take action against the culprit but often a visit from them gets a result.”

Does this mean that Gleeson never intervenes in cases where the residents are inconvenienced by nuisance, and leaves the disputes to the local authority. On the other hand, it does intervene when it is inconvenienced (where it levies charges and can run up legal costs)?

f) Restrictions on homeowners’ vans parked on drives to those with a payload below 780 kilos. Should a housebuilder really be occupying itself on these matters?

LKP has no doubt that many of these covenants are in fact desired by Gleeson customers who would want their estate to be tidy and well run.

“It is absolutely clear to me that, in the ownership of aggressive and exploitative monetisers, these restrictions could have a detrimental affect on the lives of people who live in these estates.”

We will publish Gleeson’s reply when it is received. 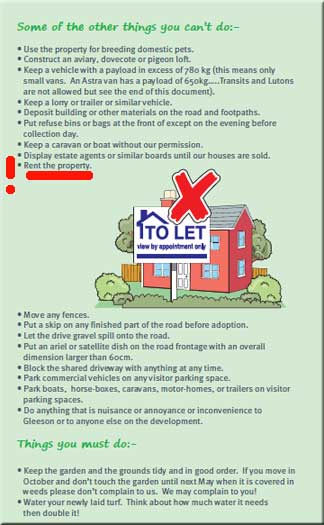 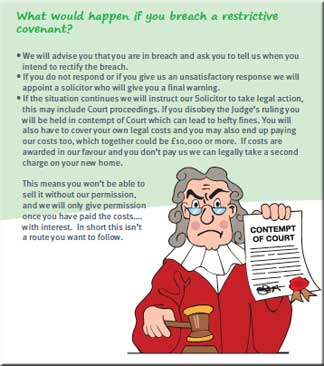 Justin Madders Bill: 10x annual ground rent and the freehold is yours … Anyone got a problem with that?