Donate
You are here: Home / Latest News / Justin Madders Bill: 10x annual ground rent and the freehold is yours … Anyone got a problem with that? 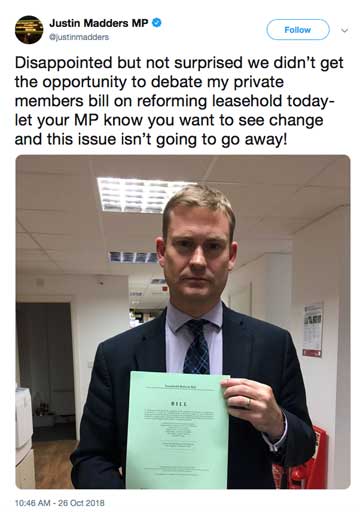 Justin Madders, the Labour MP for Ellesmere Port and Neston, has unveiled his Bill to short-circuit the smokes and mirrors calculations of the leasehold sector and allow leaseholders to buy their freeholds for 10x annual ground rent.

The Bill – in the extraordinary event that it is accepted – will render further Law Commission consultation redundant.

It would also demolish an edifice of private equity speculation in ordinary families’ homes through ownership of freeholds.

It might be argued that 10x annual ground rent is a bit severe, but freeholders have had a good run in the leasehold game – several centuries for some players – so they mustn’t grumble too much.

Furthermore, they have managed to nobble the court system with some fag packet calculations for leasehold valuations, with the accepted mathematical models commissioned by toadying estate agents for the larger freeholders.

All in all, and in a spirit of win-some, lose-some, this Bill seems fair enough.

“For all the talk of reforming the wild west world of leasehold, there has been precious little action from Government. Too many people are trapped in properties with unfair leases that a failed system has allowed to proliferate and there is little prospect of Government backed legislation coming to their rescue.

“The Bill will allow people to purchase their freeholds in a simplified, efficient and reasonable way with the purchase price being no more than ten times the annual ground rent.

“That way, everyone knows where they stand and those who want to buy the freehold can do so quickly, for a fixed maximum and without the responsibility for the freeholders costs.

“The Bill also sets up a formal inquiry into the leasehold scandal so that we get the full picture on what has happened.

“There are still many unanswered questions about the role of developers, lenders and other advisers that we need to get to the bottom of so we have a house-building industry that works for the whole country.”

Justin Madders: this could be called the Leasehold Emancipation Bill