Jolyon Harrison, the CEO of Gleeson Homes, has demanded that ground rent speculators Landmark Investments remove an endorsement by Gleeson for its services.

Landmark Investments is run by Mark Hawthornthwaite – aka as Mark Hawthorn – who has been defending ground rents speculations in a Twitter spat with leasehold activists of the National Leasehold Campaign.

In September 2017 Mr Harrison told the All Party Parliamentary Group of his strong disapproval of leasehold game playing and leasehold houses in particular.

But the following endorsement appears on the website of Landmark Investments: 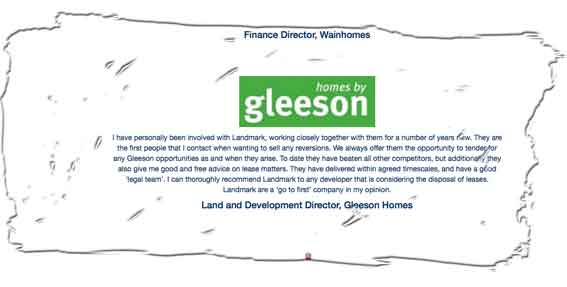 The page is / was here

The endorsement appears along with praise from Tom Bloxham MBE of Urban Splash, Wainhomes, Charles Church and BGL Partners.

“This one got us scratching our heads, there hasn’t been anyone with that job title employed by us for some years.

“You will recall that I joined Gleeson in 2009 just after our Southern house building company had been closed and at this point we totally abandoned any thoughts about leasehold.

“There were some leasehold sites at that time and the leases were sold to a variety of businesses including Landmark; there were no punitive escalating clauses.

“I assume that this is when someone at Gleeson gave landmark the testimonial. There have been a few minor tidying-up sales since then but nothing significant and nothing with escalation clauses.

“Following receipt of your email we have pointed out to Landmark that the testimonial is old and doesn’t really apply anymore and we have asked them to remove it from their website.

“Thank you for pointing this out to me. Let me know if you find any more!”

“I’ve always made a decent profit building ordinary freehold houses. If a developer is lining its pockets with leasehold then it shouldn’t. It should be against the company’s corporate social responsibility code.”

In the response to LKP, Mr Harrison said that its permission fee structures were being misrepresented: it only charged up to £200 when legitimate costs were incurred.

However, LKP has been sent another of the Gleeson advice sheets stating that permission fees “start at £200”.

We asked for clarification of this point as well and Mr Harrison replied:

“I have no intention of increasing the charge any time soon, to which you may ask me why I don’t fix it at £200. It’s because I want the flexibility to charge more if necessary.

“I cited the case of the person who kept changing their mind when we charged them £300. I don’t think this is keeping our customers awake at night.

“We sell 92% of our houses to first time buyers.

“31% of our houses are sold by recommendation from an existing customer.

“Our 2 bedroom brick built semi-detached house with front and back gardens and a drive down the side typically sells for £100,000 and if this is bought with Help to Buy and a 35 year repayment mortgage the repayments are £54 a week; typical council house rent is £80 a week.

Freehold for Elan Homes leasehold house doubles in price to £15,900 four months after being sold to Landmark Investments

Media coverage of leasehold problems just keeps on growing … Doesn’t that tell ministers something?
Next Post: Retirement sector thought it would prompt leasehold reform, but leasehold houses and double ground rents were even worse …