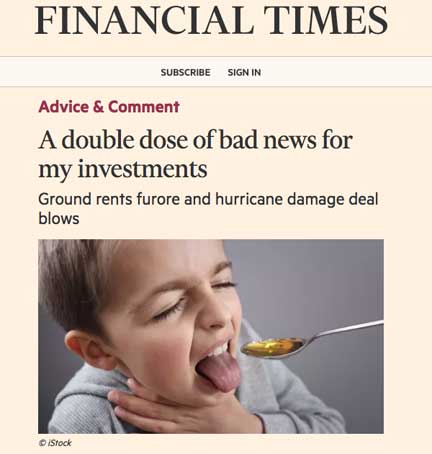 One does not wish to be unfeeling … but you would need a heart of stone not to laugh at the misery of ground rent punter David Stevenson in the FT (given the litany of miseries faced by leaseholders in terms of ground rents, permission fees, threats of forfeiture, David and Goliath battles in the leasehold tribunal etc etc etc …)

He is an investor in the Ground Rents Income Fund plc, which thanks to the furore over the doubling ground rent scandal is warning of a £6 million hit, with shares trading down at 122p.

“When I first wrote about investing in ground rents two years ago, I was almost embarrassed to classify it as something even vaguely “adventurous”. But it has become a political hot potato …

“My portfolio doesn’t contain any shares in Taylor Wimpey, but the negative headlines have had a knock-on effect on the Ground Rents Income Fund.

“This was supposed to be about as boring as you could get, churning out a steady 3.5 to 4 per cent inflation-linked yield year in, year out generated by income from ground rents …”

In a PR-friendly manoeuvre, the fund is contacting all doubling ground rent leaseholders and offering a conversion to RPI, if desired.

A double dose of bad news for my investments

Having survived the rollercoaster year that gave us Brexit and President Trump, I’ve largely stopped worrying about politics and its likely impact on my investment performance. However, a number of recent headlines have had a direct impact on a select number of investment trusts I’ve previously featured in this column.

So far unexplained, however, is the connection between the GRIF and the property management company Braemar Estates.

According to James Agar, the CEO, the fund is “committed to being a socially-responsible landlord, working hard to treat all leaseholders in a simple, honest and transparent manner”.

Mr Agar is given as a director of Braemar Estates, while Braemar chairman Martin Robinson and Mr Agar are directors of GRIF Cosec Limited, which appears to own the freeholds of the fund.

LKP has asked Mr Agar and Mr Robinson to explain the connection between the two companies, but has not yet received a response.

There should not have been much cause for delay, as conveniently both Ground Rents Income Fund plc and Braemar Estates appear to share the same offices at Richmond House, Heath Road, Hale, Cheshire.