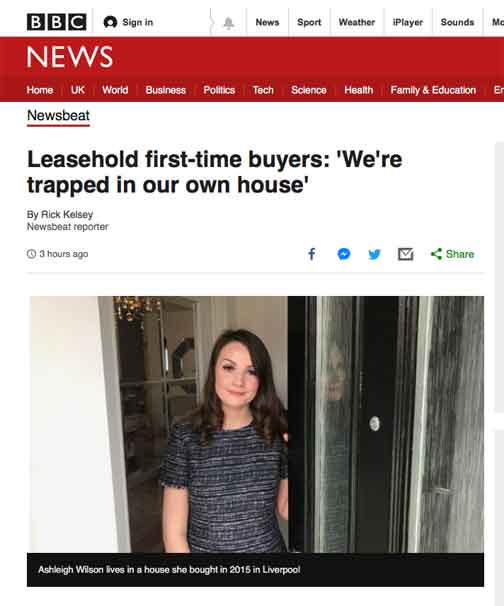 The BBC website today features a first-time buyer of a leasehold house in Liverpool who pays £800 a year in ground rent and service charges.

The BBC website reports the case of Ashleigh Wilson, 27, who bought her £200,000 home in Knowsley four years ago but now cannot sell it because of the lease terms.

“I came to view the show home with my mum and I just fell in love with it.”

Four years on, she’s in a home no-one will buy because of the strict rules on her lease – which charge her fees and stop her changing her floor tiles.

A leasehold is when you own the right to live in a building but don’t own the bricks or the ground it sits on.

It is not clear whether £800 a year is ground rent – specified in the lease – or ‘fleecehold’ service charges, which are unspecified and can be as much as the management company thinks it can get away with.

There are certainly leasehold house owners in the North West on ten-year doubling ground rents that have already doubled: with Taylor Wimpey properties this would typically be from £295 to £590 a year.

Ground rents are for no service whatsoever, and bear no relationship to the value of the property: they are simply an income stream sold off to someone else by the developer.

So a flat in Mayfair worth several million pounds sometimes has a ground rent far less than a starter home worth a fraction of that sum.

The article also references Harry Scoffin, 24, who works with LKP, saying that he thinks first-time buyers are being conned.

“Developers say ‘flats to buy’, but actually you cannot buy it, you are only buying a lease.”

He wants people to push for the Scottish system of commonhold, saying it gives people more power over fees.

“Stay renting and push for commonhold, we cannot have leasehold anymore.”

FirstPort named twice in Commons today
Next Post: 48 hours to go: LKP advice on responding to the Law Commission consultation on commonhold