Donate
You are here: Home / Ground rent scandal / Retirement housebuilders and speculators plead to be allowed ground rents in the Evening Standard 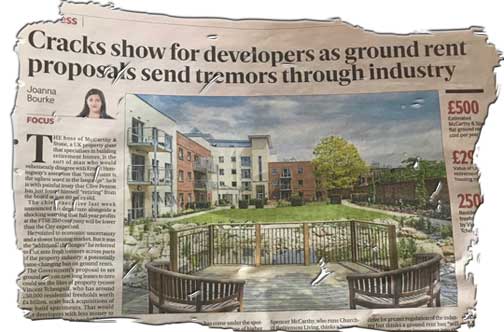 As government – and the Law Commission – reel from a barrage of special pleading by housebuilders over the government’s proposals to set ground rents as low as zero, their lobbying efforts were considered in London’s Evening Standard yesterday.

Both deplored the prospect of an end to ground rent, while Sebastian O’Kelly, of LKP, urged government to be robust saying ground rent is “for no defined service whatsoever”.

Spencer McCarthy said: “Without it we won’t be able to deliver the volume of new homes that are needed to meet the demands of our ageing population”.

But as BBC R4 MoneyBox pointed out last Saturday, the volume retirement housebuilders are “insignificant” in the market of downsizing pensioners, given that only 161,000 retirement homes have ever been produced for sale, according to Mr Fenton, who was interviewed.

McCarthy and Stone and Churchill: are you blackmailing government over the ground rent ban and is your business model broken? Asks BBC R4 MoneyBox

The boss of McCarthy & Stone, a UK property giant that specialises in building retirement homes, is the sort of man who would vehemently disagree with Ernest Hemingway’s assertion that “retirement is the ugliest word in the language”. So it is with painful irony that Clive Fenton has just found himself “retiring” from the board at just 60 years old.

Missing from the Evening Standard article was any reference to ARCO, the Association of Retirement Community Operators, which has publicly stated that there is no need for ground rents. Or Legal and General, which entered the retirement housing market last year, and echoes the views of ARCO over ground rents.

A question legislators and civil servants need to ask is: why do so few British pensioners want designated retirement housing?

Only 2 per cent of over-65s live in them, compared with 12% in North America and 17% in Australasia.

1/ Two Office of Fair Trading investigations into the retirement housing sector: one finding that exit fees on resale were “likely to be an unfair contract term”; one finding that 65 retirement sites around the country had been systematically cheated in a bid rigging scam over electronic doors orchestrated by Peverel / FirstPort, which has a near monopoly on the management of retirement flats.

2/ Freeholds with their ground rents and other income streams being sold off to speculating financiers, who often hide their beneficial ownership behind nominee directors and are based offshore.

3/ Repeated and unending complaints about rip-off service charges, as heard in courts and Parliament. McCarthy and Stone’s £1 million libel attack on The Daily Telegraph in the early 1990s, which ended in debacle, shows how long-standing these controversies are.

4/ Retirement flats often plummet in value on resale, having been sold new for more than equivalent local housing in the first place.

The volume retirement housebuilders build very few retirement flats and their past actions explain why they are unlikely to be building very many in the future.

Pensioners have every reason to be wary of these products, and to downsize into ordinary smaller flats and bungalows.

The Evening Standard quoted Richard Silva, “a principal” of Will Astor’s Long Harbour residential freehold fund piously supporting some drivel about “greater regulation of the industry”.

He added that a ground rent ban “will reduce significant investment into the residential sector, and remove a much needed safety net provided by professional freeholders to homeowners”.

Well, in the case of Long Harbour we will have to take his word for it that they are “professional”: these private equity speculators hide their beneficial ownership behind nominee directors of the Sanne Group headquartered in Jersey and are often based offshore.

Also adding his pennyworth to the article is Donagh O’Sullivan, CEO of the Stephen Conway’s Galliard Homes, who thinks a zero ground rent would deter him and others “committing to certain developments”. He says: “It would be a daft move.”

Galliard is the developer of New Capital Quay in Greenwich where 1,000 homeowners have their lives on hold because Galliard, which still owns the freehold and manages the site, built it with the now-flawed Grenfell cladding. An unseemly squabble is afoot between Galliard and warranty provider NHBC over who pays, with the possibility that leaseholders may have to.

But contrast Galliard’s gormless aggression at New Capital Quay with Taylor Wimpey agreeing to pay the cladding bill at Glasgow Harbour. Of course, in Scotland there is no freehold owner to muddy the waters and the flat owners have a direct legal connection with insurance policies, warranties and in all subsequent litigation. They are not tenants unlike the leasehold “home-owners” in England.

Examining the leasehold sector, the government is peering down the manhole cover of the murkiest place in the residential property sector. And it does not smell of roses, either.

People with lots of money are hitching a ride on the homes of people who do not have very much.

LONDON (Alliance News) – Ground Rents Income Fund PLC on Wednesday swung to a loss after its property investments were revalued due the UK government’s proposed leasehold reforms. The trust recorded a pretax loss of GBP5.0 million for the year to the end of March, compared with GBP8.0 million profit reported the prior year.

Housebuilders shares crash over ground rents, with McCarthy and Stone down 10%

Prime Minister ‘not ruling anything out’ with freeholders and builders over responsibility for Grenfell cladding
Next Post: Cladding forum for private leasehold blocks – 18th July