Donate
You are here: Home / Latest News / Housebuilders shares crash over ground rents, with McCarthy and Stone down 10% 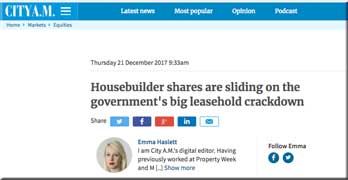 McCarthy and Stone was hardest hit with a fall of 10.3 per cent. Four per cent of its income comes from ground rents, which are historically high in retirement housing.

This is the highest proportion of all the listed housebuilders, although Churchill will be in the same boat.

Ground rents are for no service whatsoever, but make the freehold attractive to investors, many of whom are based offshore and anonymous.

Housebuilder shares have fallen as much as 10 pc today: Here’s why

Housebuilders were hit hard this morning after the government revealed new rules cracking down on leasehold practices described by communities secretary Sajid Javid as “feudal”. Shares in FTSE 250-listed McCarty & Stone, which specialises in retirement homes, fell 10.3 per cent to 152.3p on the news.

Shares in housebuilders have dipped as investors take fright at the Government’s plans to ban new leasehold houses from being sold. In its crackdown on what communities secretary Sajid Javid described as “feudal” practices, it is also set to ensure that ground rents on new long leases in England are set to zero, for both houses and flats, as well as making it easier and cheaper for leaseholders to buy out their freehold.