Donate
You are here: Home / News / FirstPort / Been ripped off over leasehold insurance? Take your complaint to the secret ombudsman, says Peverel 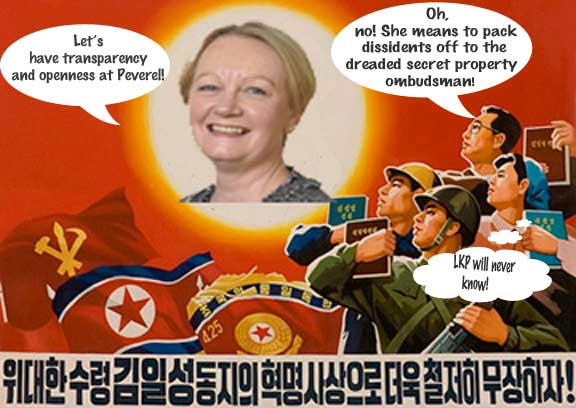 A retirement leasehold resident disputing Kingsborough insurance commissions with Peverel has been told that she must take her dispute to an ombudsman, whose rulings are not published.

Joan Wade, who has lived at Grasmere Court in Worthing since 2003, was appalled to receive a letter from Peverel’s senior area manager on February 26 stating:

Alternatively, Joan and her neighbours could take their case to the Leasehold Valuation Tribunal and – very publicly – dispute thousands of pounds of commission.

This is what Janet Entwistle, Peverel chief executive, and the venture capitalist owners of Peverel are very keen to avoid. She said in June last year in her AskJanet blog:

“Historically, some insurance commissions have been too high … With regard to your particular dilemma to take this to a tribunal, that really is something I want to stop.  We must look to try and resolve all matters constructively far earlier in the process so it doesn’t get to that.”

The full text (which is no longer on the Peverel site) can be read here: http://www.betterretirementhousing.com/there-are-problems-with-peverels-reputation-but-new-owners-are-in-it-for-the-long-term/

At Strand Court, in Rye, the commissions were reduced to zero at an LVT and Peverel was criticised for treating the residents with “arrogance” and for “the intentional hiding of information to which residents would have been entitled” by doling out contracts to their own subsidiaries. 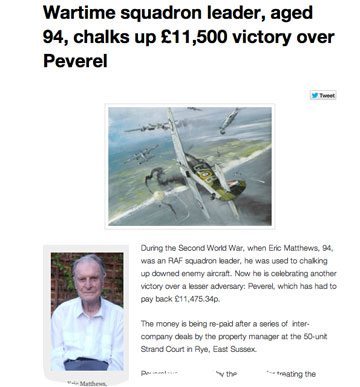 The full report can be read here: http://www.betterretirementhousing.com/wartime-squadron-leader-aged-94-chalks-up-11500-victory-over-peverel/

A recent Kingsborough commission dispute at another retirement site in Kingston, Surrey, was settled earlier this month – with the residents gagged by a confidentiality agreement.

In the light of such stinging criticism at the Strand Court case, Peverel’s enthusiasm for mediation and behind-closed-doors redress schemes is quite understandable.

But curiously on April 1 it has changed from the Housing Ombudsman Ombudsman to the Warrington-based Ombudsman Services: Property.

Both are commercial companies, misleadingly described as “not for profit” companies although they provide livelihoods for their employees.

Interestingly, Peverel itself should be paying for these ombudsman services (about £40 a block) rather than have the fee dumped on leaseholders through the service charges.

This LVT ruling made it perfectly clear that as an ombudsman scheme is not mentioned in the lease it should be Peverel paying to join it. The LVT case was: CHI/29UN/LIS/2012/0033.

A report of this can be read here: http://www.betterretirementhousing.com/peverels-approach-to-self-regulation-is-you-pay-for-it-and-it-goes-on-the-service-charge-even-though-an-lvt-says-it-shouldnt/

Peverel made clear at that time that this ruling only applied to that particular site … so leaseholders elsewhere may be having to pay for Peverel to clean up its reputation.

To be attributed to a Peverel Group spokesperson

LKP: Can you please explain why Peverel moved from using the Housing Ombudsman for complaints redress to the Warrington-based Ombudsman Services: Property from April 1?

A: We reviewed our ombudsman service in response to customer feedback and strongly believe Ombudsman Services: Property will provide the best service for our customers. As an expert in the field of property dispute resolution, the service is well placed to resolve issues quickly and to the satisfaction of our customers.

LKP: Is Peverel paying for membership of the Ombudsman, or levying a charge on the leaseholders to do so?

A: We received feedback from Peverel Retirement customers about the charges of the previous ombudsman service.  Under the new arrangement, no charges will be made to customers or service charge accounts for this service.

LKP: A reader, who is disputing Kingsborough insurance commissions, is complaining about receiving from a Peverel senior area manager a letter which reads: “I understand the matter of insurance commissions has already been considered by our complaints panel and you have been informed of their decision.  If you are unhappy with their decision the next stage in our complaints procedure is to write to the Housing Ombudsman.”

A: We feel that the LVT process can be confrontational and very difficult for an individual. Our experience is that resolution of disputes by an independent organisation produces far better results in a less combative environment. It is also quicker and far cheaper for a customer.

‘Secret ombudsman schemes are so much better for leasehold than licensing managing agents,’ says DCLG

Vicky Pollard property tribunal: yes, but … no, but … Yes, you have been ripped off over insurance. But no, we can’t do anything about it

Leaseholders pay up to 60% more for buildings insurance because of secret commissions, reports The Times, Harry Scoffin,