Donate
You are here: Home / Latest News / Can the Tories wriggle out of reforming leasehold? Don’t bet on it … 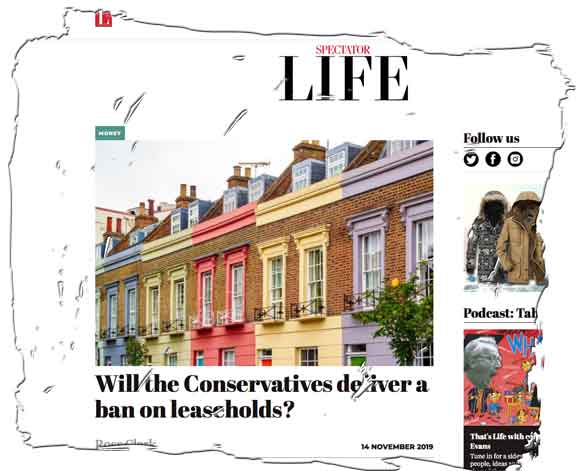 The Spectator questions the government’s commitment to reform leasehold, after dropping it from the Queen’s speech.

Reforms had been pledged – three times now – but under Boris Johnson, the Conservative leaning magazine sees things slowing down.

The article by the authoritative commentator Ross Clark says:

“But Boris is believed to be less keen.

“According to Sebastian O’Kelly, who runs the Leasehold Knowledge Partnership, which has campaigned for leasehold reform and advises the all-party group ion leasehold reform, which had the support of 177 MPs in the last Parliament, “Boris will almost certainly shaft us.”

“He points out that Sir Lynton Crosby, who ran Boris’ campaign for Mayor of London and is involved in this general election campaign too, also has among his commercial clients Long Harbour, a £1.7 billion fund which invests in ground rents – and which would be one of the big losers from ground rent reform.”

The more nuanced view of O’Kelly was given to the annual general meeting of the Federation of Residential Property Associations.

FPRA annual conference: Labour has a clear leasehold reform agenda, but why are the Tories wobbly?

Here it was argued that Boris Johnson might be tempted to side-line leasehold reform – even reneging on the repeated undertaking to set new ground rents to zero.

But events might shift the agenda. The reason is that 17,000 people are now living in private flats deemed valueless because of combustible cladding.

This dwarfs the 400 or so blocks with some form of Grenfell cladding, who were in line for a government handout of £200 million.

The obvious question is: why are they being given a free pass because they have Grenfell ACM cladding, when many more have equally combustible alternative forms of cladding?

And who is going to pay? This is a billion, possibly two, not just £200 million.

With such serious money at stake, policymakers are bound to scrutinise the legal structures around apartment blocks in England and Wales and ask: why on earth are we tolerating third-party, speculative freeholders? Some are distinctly unsavoury, and others are based offshore and unknowable.

Such as the owners of many of the Long Harbour freeholds.

Whoever is the next Communities Secretary has this landing on their desk.

Will the Conservatives deliver a ban on leaseholds? | Spectator Life

One of the main factors in Jeremy Corbyn’s surprisingly strong showing in the 2017 general election was housing. Young voters are pretty fed up with being unable to afford a decent home, even when they are working hard and are earning a good income.

FPRA annual conference: Labour has a clear leasehold reform agenda, but why are the Tories wobbly?