Donate
You are here: Home / Latest News / Dear Jeffrey Fairburn … Can I buy the freehold to a Persimmon house before you sell it to anonymous investors, please? 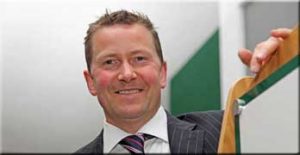 An excellent letter has been sent to Jeffrey Fairburn, the CEO of Persimmon Homes, which has built and sold more leasehold houses than any other developer.

A potential buyer asked the Facebook National Leasehold Campaign whether he can buy the freehold to the house he wishes to buy, and copies the correspondence to housing minister Gavin Barwell and Sir Peter Bottomley, co-chair of the All Party Parliamentary Group on leasehold reform.

Jeffrey Fairburn of Persimmon, like Ted Ayres CEO of Bellway Homes, has yet to make any public statement at all about leasehold houses and their lucrative income streams (for anonymous investors).

This is in striking contrast to the lines given to him by his PR department for the company report last year:

“The housebuilding sector is attracting ever greater scrutiny from different stakeholders and for different reasons.

“This is something we welcome as only by creating a shared understanding of the challenges we face will we be able to identify and implement effective and sustainable solutions that benefit not just our industry but the country.”

I’m writing this to bring to your attention a recent refusal of my offer to buy the freehold, with regards to a new build property I’m interested in that is currently being marketed by Charles Church at Manor Place in Maidenhead.

Further to a number of queries I had regarding the lease itself, I was referred to the Sales Site Manager by the sales staff at the site.

When I offered to buy the freehold right now at a fair market price, it was rejected straightaway. I was advised the following (stated below in Italics):

– ‘The reason these houses are being sold as a Leasehold is to ensure the ‘aesthetics’ of the site is maintained whilst Persimmon were still on site for future phases. ‘

In response to this, I mentioned I was more than happy for a clause in the contract to explicitly state that I couldn’t make any external modifications to the property whilst the builders were still on-site. However, whilst she acknowledged this would solve the above issue, she said Persimmon couldn’t accept this.

– ‘It was company policy not to allow freehold purchases right at the outset, but instead after two years.’

When I queried the logic behind this, there was no explanation whatsoever. Just more re-iteration that it was company policy and reference to eligibility for enfranchising, but none stating why the negotiations couldn’t take place now.

– ‘The freehold ‘may’not be sold by Persimmon to a 3rd party. Only the ‘long leasehold’ will be sold and the freehold will be offered to me in 2 years’ time by Persimmon to purchase at a rate determined by a calculation readily available at gov.uk.’

I have subsequently asked for this ‘calculation’ for which there was no response. And there have been plenty of reports in the media and online, where people have been asked to pay thousands of pounds for their freehold when they went to purchase in two years’ time.

In light of the above, we are highly stressed about the uncertainties looming in the years to come over everything to do with the house and will not proceed unless we can buy the freehold now, for which I’m happy to pay the fair current market value. There’s at least one other buyer at the same site who I know for a fact has had the same issues as above, and is in the same boat as myself.

I hope you can appreciate that this is a very stressful time for all concerned, and all we’re asking as home buyers is for a fair resolution to the above issue.

Look forward to a positive response.

Dear Pete Redfern … Taylor Wimpey cheated us: what are you doing about it?
Next Post: Dear Ted Ayres … your company Bellway sold our family’s future