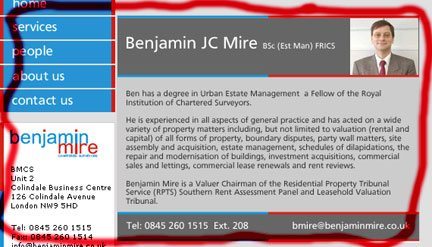 A pensioner who won £3,500 at a Leasehold Valuation Tribunal has made a formal complaint that Benjamin Mire, who runs a large property management company and was criticised in the case, also sits on the same local LVT as a panel member.

“This is a clear conflict of interest and affronts every notion of justice I have ever learned,” says Colin Dennard, 71, a retired international hotelier, from Bournemouth. “I felt most uncomfortable. It is clearly wrong to have to face someone who appears as a member of the tribunal panel at the very same LVT offices.”

Dennard, who managed Carlton Hotel in Cannes and the Meurice in Paris, has sent a detailed complaint to barrister Siobhan McGrath, the head of the LVT system.

The case, in which Dennard represented friends for no fee, is the second occasion when he has faced Mire, 52, of Trust Property Management Group plc, which manages the property interests of freeholder Lakeside Developments. Mire is a chartered surveyor, which is why he is qualified to sit on LVT panels.

In his first action against Mire in 2009, who again represented Lakeside Developments, Dennard successfully insisted that the case be heard by the London LVT because of Mire’s involvement as a panel member in the southern region. He received a confidential settlement.

In the latest case, heard in October, Dennard was representing four leaseholders at Arthur Court in Bournemouth, a purpose-built modern block of four flats.

Trust Property Management, which is based in Colindale, north London, says it employs 50 staff and manages 14,000 residential and commercial units, including 150 RTM blocks.

The LVT threw out a £458 bill for an unnecessary asbestos survey as the flats were only built in 2004/5. It said it was “disappointed” that the respondent had not told the surveyor this fact “who was left to guess as to the date of construction”.

A £343 bill for a fire and health and safety risk assessment was permitted, although again the tribunal was “disappointed” that it was “conducted so long after one had been legally required”.

The management fees charged by Mire from 2005-2012 were halved after the LVT visited Arthur Court and saw the “lack of routine maintenance” and “breaches of the landlord’s covenants for decoration”. Using their local knowledge of Bournemouth, the LVT felt £1,000 a year would have been a reasonable management charge.

“The Tribunal also was concerned by Mr Mire’s admission that Trust did not maintain satisfactory records until 2011, such that he was unable to give the Tribunal any meaningful assurance that the building had been the subject of regular management visits in accordance with the RICS Service Charge Residential Management Code.”

The LVT also approved Dennard’s section 20c application, which meant the freeholder could not claim costs for the hearing.

Mire attempted to appeal the case owing to a query he had made to the Health and Safety Executive and was awaiting an answer. But the Tribunal refused the request. Dennard was not informed of this appeal by Mire or the LVT, which he should have been according to the tribunal service’s own regulations. This also features in his complaint to McGrath.

Mire has represented Lakeside Developments at more than 30 LVT hearings and it owns 16.75 per cent of Trust Property Management Group plc. Mire himself owns 14.63 per cent and Simone Mire owns 15.3 per cent.

The full case can be read here