The Royal Institution of Chartered Surveyors has decided not to pursue a complaint about a member, Benjamin Mire, who was criticised for failing to follow its “residential management code” at a recent Leasehold Valuation Tribunal.

An additional complaint concerning Benjamin Mire, of Trust Property Management Limited, was that Mire, a chartered surveyor, also sits on the LVT as a panel member. It is claimed that this is a potential conflict of interest.

At an LVT ruling in November 2012, Trust Property Management Limited, which manages the property interests of freeholder Lakeside Developments, was criticised with Lakeside for the management of Arthur Court, a two-storey site of four flats in Bournemouth.

As reported on LKP, the LVT threw out a £458 bill for an unnecessary asbestos survey as the flats were only built in 2004/5. It said it was “disappointed” that the respondent (Lakeside Developments) had not told the surveyor this fact “who was left to guess as to the date of construction”.

A £343 bill for a fire and health and safety risk assessment was permitted, although again the tribunal was “disappointed” that it was “conducted so long after one had been legally required”.

The management fees charged by Trust from 2005-2012 were halved after the LVT visited Arthur Court and saw the “lack of routine maintenance” and “breaches of the landlord’s covenants for decoration”. Using their local knowledge of Bournemouth, the LVT felt £1,000 a year would have been a reasonable management charge.

“The Tribunal also was concerned by Mr Mire’s admission that Trust did not maintain satisfactory records until 2011, such that he was unable to give the Tribunal any meaningful assurance that the building had been the subject of regular management visits in accordance with the RICS Service Charge Residential Management Code.”

In a letter to pensioner Colin Dennard, 71, who represented the leaseholders and won the case, RICS says it had made note of the criticisms of Mire and Lakeside that were raised in the LVT ruling.

However, as Trust is a large company, RICS says it would expect a high number of referrals to the LVT. In addition, all members of RICS were monitored regularly.

The complaint regarding the “residential management code” would not be progressed, RICS said.

RICS was aware of a complaint concerning the claimed potential conflict of interest of Mire sitting on the LVT, and that this was now under consideration by the Office for Judicial Complaint.

“I am very disappointed, but I regret it is what I expected from RICS,” says Dennard.

Benjamin Mire, of Trust, points out that another complaint by Dennard to the Advertising Standards Authority was also dropped as it concerned ‘Trust Premier’. The “complainants were not subject to this service”, according to the ASA.

“I think it appropriate that you mention that Trust were appointed London Property Management Company of the Year in 2011-2012 and were a finalist in 2012-2013 in that same category as well as in the Customer Service and Surveyor of the Year categories,” Mire says in a statement to LKP. “I myself was Highly Commended in the category of London Property Manager of the year in 2012-2013 and was a finalist in the Enfranchisement and Right to Manage category in 2012.”

These are organised by the sector’s magazine News On The Block.

The full LVT ruling of November 2012 concerning Arthur Court can be read here:

The Advertising Standards Authority decision can be read here: 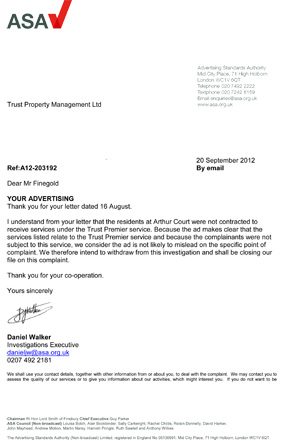