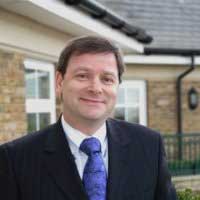 Benjamin Mire, who frequently represented his client Lakeside Developments at the property tribunal while also holding a judicial appointment, faces a two-day disciplinary hearing of the Royal Institution of Chartered Surveyors on June 1-2.

Mr Mire, whose own firm Trust Property Management is based in Colindale, north London, is to be heard on four formal charges (listed here and in full below).

These include failing to act at all times with integrity, bringing RICS into disrepute, failing to avoid conflicts of interest and failing to avoid actions inconsistent with his professional obligations while holding a judicial office with the property tribunal.

Mr Mire was a part-time chairman of the property tribunal, yet frequently appeared before it on behalf of his client Lakeside Developments Limited.

He was the subject of a Judicial Conduct Investigations Office inquiry in 2013, but he resigned his judicial appointment before its conclusion.

In an exceptional move, the JCIO made clear that he would have been sacked in any case. It said: 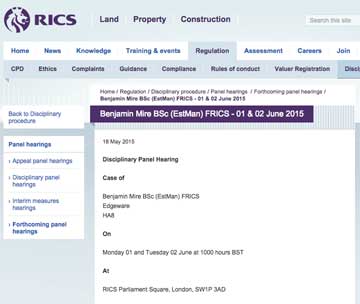 In February, Mr Mire sought a judicial review into his professional body holding a disciplinary panel into his conduct.

He argued that he had suffered “anguish, apprehension and £3 million in losses” since being removed from his judicial appointment. There was also the “impact on his human rights”, he claimed.

But the judge said that there was no particular evidence that Mr Mire would be subject to additional stress or anxiety than any other person facing a RICS disciplinary hearing.

The charges faced by Mr Mire are:

1. On 25 October 2012, you failed to act at all times to avoid conflicts of interest and/or avoid any actions inconsistent with your professional obligations, contrary to Rule 3 of the Rules of Conduct for Members, in that you appeared before the Southern Leasehold Valuation Tribunal (“the LVT”) on behalf of your client, Lakeside Developments Limited. This was inappropriate in that:

(a) your appearance before the LVT was contrary to Guidance Note 1 – Conflicts of Interest provided to those holding judicial office;

(b) as you sit as a part time Chair of the LVT, this represented a potential conflict of interest.

2. You failed to act at all times to avoid any actions inconsistent with your professional obligations, contrary to Rule 3 of the Rules of Conduct for Members, as demonstrated by the statement of the Judicial Investigations and Conduct Office (“JICO”) dated 15 November 2013 which found you had failed to observe the standards that could reasonably be expected of a judicial office holder.

3. Your conduct as described in the statement of the JICO dated 15 November 2013, given your membership of RICS, was liable to bring RICS into disrepute, contrary to Bye-Law B5.2.2(a)

4. As a member of RICS you failed at all times to act with integrity and/or avoid any actions inconsistent with your professional obligations, contrary to Rule 3 of the rules of Conduct for Members, the particulars being that:

(a) In an article published in News on the Block (issue 40) during the course of an interview with Jamie Reid, you inappropriately used your position as a part time Chair of the LVT to:

(i) further your own interests;
(ii) further the interest of Trust Property Management Limited.