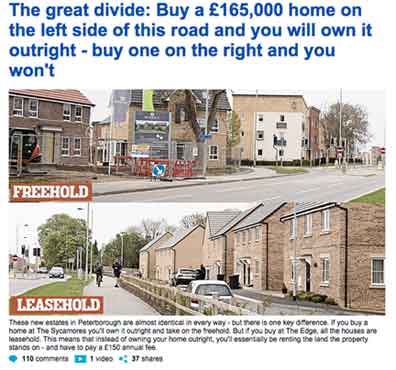 The Daily Mail today brings to light a scandal of current housebuilding: the building of free-standing leasehold houses.

This is in preference to freehold, which is the form of tenure that these houses would normally be.

The newspaper highlights London Road in Peterborough where Persimmon is building three bedroom houses and selling them as leasehold for around £170,000.

Opposite, on the west side of the road, Barratt is also building houses but selling them as freehold for around the same price.

It is extraordinary that buyers are falling for this example of housebuilder opportunism : a leasehold property, unique to England and Wales, is a tenancy.

It is a form of tenure to be avoided if at all possible.

This means that the leasehold buyers will pay ground rents, require paid permission for home improvements such as conservatories and doubtless pay a service charge for the upkeep of common parts.

Oh, and every passing year their property will erode in value as the lease reduces.

There is no justification at all for housebuilders to build houses with leasehold tenure. It is simply playing the system and exploiting the ignorance of buyers.

If these buyers have used solicitors recommended from a panel by Persimmon, then there is a question of their professional impartiality.

Paula Higgins, chief executive of the HomeOwners Alliance consumer group, contacted LKP before the publication of this article.

We were unaware that large housebuilders were adopting this practice, but it makes perfect sense given the housing crisis.

Miss Higgins is quoted in the Mail saying: ‘There is no justification for having new-build houses as leasehold.

“It is just a way for developers to make money from people who think they own their own home. It is an outrageous practice. I suspect that often buyers have no idea what they’re signing up to.”

The advantages to a housebuilder of building a scheme with leasehold tenure is obvious.

It sells the houses for almost exactly the same as competitors selling freehold houses, and then it flogs off the lucrative freehold.

The Mail says figures from property firm Savills show that over the past five years investors have piled £1.2 billion into residential properties which have a ground rent.

The money from these ground rents is viewed as a steady stream of income at a time when interest rates are low. The investment company can then resell the freehold to another buyer.

A report from property consultants CBRE says: ‘House-builders have become more aware of the benefits of structuring leases in an attractive manner to increase the value of their holdings and seek to maximise sale receipts on disposal.’

Two years after moving in, leaseholders have the opportunity to buy the freehold of their home. How much it costs depends on the value of the home, the ground rent and the years on the lease.

It costs roughly £4,150 to buy the freehold of a £250,000 house, with a ground rent of £250 a year and 995 years left on the lease, according to figures from chartered surveyors Andrew Pridell Associates.

Legal fees may add £3,000 to this bill. For families on a budget, spending more than £7,000 to own outright will simply be unaffordable.

Persimmon said only around a third of its houses built over the past three years are leasehold.