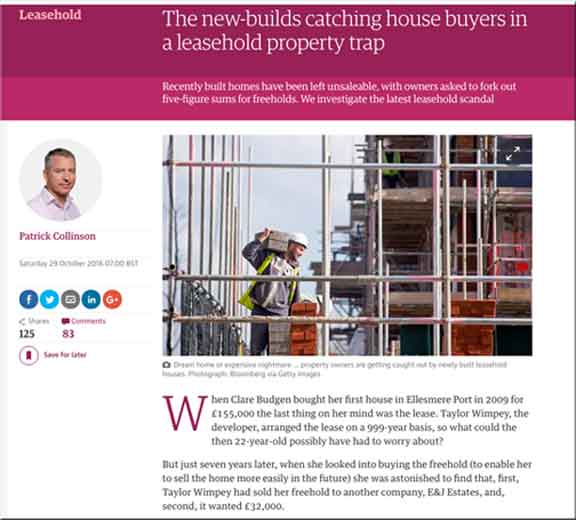 The disgraceful and increasingly widespread scandal of plc housebuilders selling leasehold houses is reported in The Guardian today.

The article, based on research by LKP, reports cases of leasehold houses from plc housebuilders having escalating ground rents that can reach £9,360 a year.

These houses are now unsellable as resales through normal estate agents and LKP is informed that mortgage lenders will not lend against them.

Worse still, many of these leasehold houses have been bought with taxpayers assistance through the Help To Buy scheme.

“I have had a number of constituents contact me, saying they were aware at the time of purchase that the freehold was extra. However, they didn’t know the original developer sold the leaseholds to private investors who have ruthlessly exploited the law to line their own pockets.

“The prices they have been quoted to buy the freehold have rocketed beyond any reasonable sum people can afford. I have found constituents are unable to afford the fees being quoted and there are extortionate charges associated with obtaining permission to alter the property. Just over £2,500 was quoted for permission just to build an extension.”

The Guardian could find no prominent mention on Persimmon’s website, or in the brochure, that the homes were leasehold.

The sales staff were also repeating gibberish that leasehold houses are “virtually freehold”.

LKP successfully persuaded McCarthy and Stone to drop this nonsense term in the summer.

Persimmon is quoted saying: “Persimmon sells a mixture of both leasehold and ­freehold properties. As Persimmon has acquired other ­companies over the decades, it has inherited the freehold reversions of leasehold properties sold by those businesses. There are around three million leaseholders in Britain. All Persimmon leasehold houses carry an extremely long ­999-year lease and customers are informed at ­purchase what type of property they are buying.”

LKP would say this statement is utter rubbish, including the figure of three million leasehold properties (the official figure used by government is 4.1 million).

Persimmon has chosen to build leasehold houses at sites across the country. This has nothing to do with inheriting freehold reversions.

Taylor Wimpey is quoted saying: “At Taylor Wimpey the vast majority of our houses are sold on a freehold basis. However, in a small number of developments, ­predominantly in regions of the ­country where it is common practice in the market, we sell houses on a leasehold basis. Throughout any sale process, customers are fully informed of the ownership structure of the home. If a customer is interested in such a property, the sales team advises them whether the property is being sold on a leasehold basis.”

LKP would say this, too, absolute nonsense. In no area of England and Wales is it “common practice in the market” to sell on a leasehold bases.

Nowhere in the country is it a widespread practice to build leasehold houses.

The Leasehold Knowledge Partnership is determined to make leasehold houses top of the agenda for the All-Party Parliamentary Group on leasehold and commonhold which meets on November 16.

It has attracted 43 MPs and lords, and is chaired by Labour MP Jim Fitzpatrick and Tory Sir Peter Bottomley. Members include Sir Keir Starmer, Emma Reynolds and Barry Gardiner.

“It is disgraceful that plc housebuilders are building leasehold houses that ordinarily – and until recently – would have had freehold title. This is an erosion of the wealth of ordinary people to the advantage of the rich.

“Young people, after years of paying rent, finally buy a home and then find they are still, in fact, tenants – which is what a leaseholder is – with all the vulnerability that that implies.”

“The housebuilders are evasive over this issue and it beggars belief that the outrageous ground rent multiples come from household-name builders. There is no attempt to justify the adoption of leasehold tenure for these houses, which are not complex communal sites such as blocks of flats.

MP Justin Madders is calling for a ban on leasehold for estates of houses. “It is clear this system is being abused to drive huge profits at ordinary ­homeowners’ expense. There is no need for there to be leasehold properties, particularly those on an estate where the properties are mainly detached houses.

“They need to be banned – it may be a convenient way for developers to get extra profit from their building work, but once they get in the hands of these private equity companies the profit motive overrides any considerations that there are real people living in their homes, who are being asked to stump up eye-watering sums.”