(Not to be reproduced without acknowledgement of the Leasehold Knowledge Partnership) 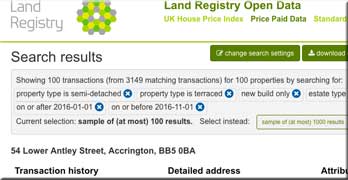 Last year new build leasehold houses worth £1.9 billion were sold in England and Wales, according to data on the Land Registry.

So far this year 3,149 new-build leasehold houses have been sold and recorded on the Land Registry.

In total they amount to £775 million of property.

As the Land Registry can take several months to record a new transaction, the 2016 data is incomplete. It should not be assumed that 2016 sales will be lower than 2015.

LKP notes that there are a small number of errors in the Land Registry records where leasehold flats are recorded as houses, and vice versa. We do not believe the net impact of these errors has a significant impact on the totals given.

The new-build leasehold houses stretch right across the country, from Penrith (Persimmon, again) down to the Isle of Wight.

Several areas of Wales are affected, with a reintroduction of new leasehold houses on a scale not seen since mine owners began building tied accommodation in the Valleys.

A disproportionate amount seems to be in the North West, and in poorer areas.

There are numerous advantages for developers to sell houses on leasehold tenancies, not least the continuing revenue streams.

Developers may also sell leasehold houses at what they consider to be a discounted price, as they can then sell on the freehold to investors. This may explain the significant number of new leasehold houses being sold in less affluent areas.

However, there are also smatterings of new leasehold house sales in the affluent South East and South West.

There is a heavy concentration in Thurrock, where Persimmon has again been active selling its Village scheme at Aveley, and at Peterborough, where leasehold houses first sparked national controversy.

LKP was contacted by a potential Persimmon customer of a new leasehold house this afternoon.

Our advice is: 1/ Offer to buy the property with the freehold title or walk away; 2/ Never buy any property with solicitors recommended by developers, as there is an obvious conflict of interest.

Click the link below for the complete list of new-build leasehold houses recorded on the Land Registry this year.