Donate
You are here: Home / Latest News / Leasehold houses have been sold for more than freehold ones, reports Telegraph 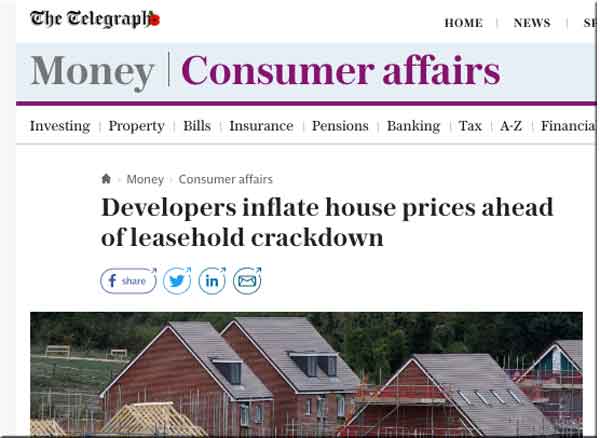 The Daily Telegraph today reports data that shows that prices for new leasehold houses have risen faster than those for new build freehold ones.

LKP research shows that (initial) prices for leasehold houses have risen, as developers have increasingly adopted this form of tenure in order to create an investment asset class – the freehold and its income – at the expense of their own customers.

It is tragic that we taxpayers have poured money into the Help To Buy scheme to encourage first-time homeownership and in fact fuelled housebuilders’ profits and investments for ground rent speculators.

Communities secretary Sajid Javid has been aware of this since last year. He needs to stop it now.

Developers repeatedly say in evidence to government that they need the continuance of leasehold as the sale of the freeholds underpins the viability of some development projects.

Retirement housebuilders McCarthy and Stone and Churchill make this argument and both introduce ground rents way in excess of the Nationwide’s 0.1 per cent of capital value, above which it will not issue mortgages.

Our research debunks the developers’ argument about site viability. In fact, they selling leasehold properties for whatever they can get away with.

And owing to the housing crisis they are getting away with a lot: their shoddy leasehold products are selling for increasing prices at initial sale.

However, after the initial sale it is a very different story.

Some 100,000 leasehold houses and flats are blighted owing to onerous lease terms according to Nationwide, which won’t lend on them. Nor will other increasingly alarmed lenders.

The Leasehold Knowledge Partnership undertook two detailed pieces of work adopted by the All Party Parliamentary Group on Leasehold and Commonhold Reform.

1/ That leasehold houses are often being sold at a premium.

2) The data on the growth of the leasehold house sales appears in our report here:

It shows the rapid growth in number in recent years

We also outline in the article that the developers are earning £300 – £500 million a year from freehold sales on leasehold homes and we suggest this is the real reason why developers have returned to selling houses with this form of tenure.

It is utterly dishonest – but sadly no surprise – that developers and the sycophantic professionals who pander to them claim that selling leasehold somehow allows them to keep costs down and build more homes.

Here’s why housebuilder shares are down today

It was a bad morning for housebuilders, with companies listed on both the FTSE 100 and FTSE 250 dragging the indices lower. Persimmon, the UK’s largest housebuilder by volume, led the fallers on the FTSE 100, with shares dropping 3.4 per cent to 2,772.5p, while Barratt, Taylor Wimpey and Berkeley Group were all among the biggest fallers.

Press reports how freehold doubled in price to £15,900 after being sold to Landmark Investments