Donate
You are here: Home / Latest News / Telegraph reports case of Taylor Wimpey pensioner who has paid £38,000 for his freehold … and now won’t help him 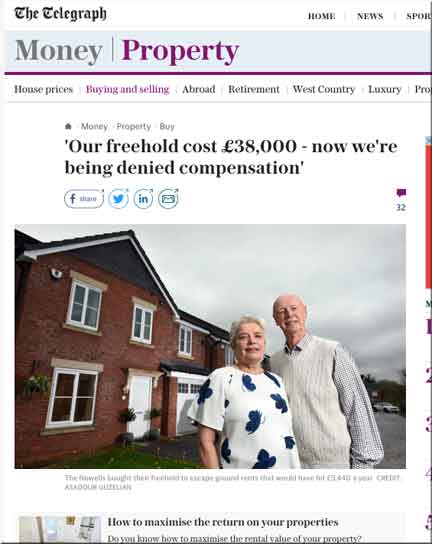 Leaseholders facing spiralling ground rents were given some relief earlier this year when Taylor Wimpey scrapped its unfair terms – but those who had already paid high costs for their freehold have been left out in the cold.

Mr Nowell and his wife, Margaret, whose home is in Oakdale Drive, Whalley, Clitheroe, were facing spiralling ground rents, which would have risen from £295 a year to £9,440 a year over 50 years.

“It feels like a real rip-off but they had us over a barrel so we accepted,” Mr Nowell tells Sam Brodbeck, of the Telegraph.

“In addition to buy-out costs for the freehold on their Lancashire home, they had to stump up £4,000 in legal fees.

Under rules set out in the 1967 Leasehold Act the right to “enfranchisement” also requires homeowners to pay the freeholder’s legal and valuation fees. Leaseholders normally have the right to buy freeholds two years after the property purchase.

A spokesman for E&J, which owns 40,000 leases, told the Telegraph that the nearly five-fold increase in its price had been driven by falling interest rates.

It also washes its hands of any responsibility for ripping off the pensioners: once the enfranchisement process had begun it was “compelled” to sell the freehold to the leaseholder by law.

It was not compelled to dream up an inflated sum for it, however.

For current leaseholders, Taylor Wimpey will convert the existing leases into ones with more reasonable terms. Mr Nowell said the reason he bought the freehold was to avoid the soaring ground rents, and now feels like he has overpaid unnecessarily.

“I think Taylor Wimpey should be treating us as they have or are going to with current leaseholders,” said Mr Nowell. “They should compensate us for the difference in value between the old and new leases.”

Sebastian O’Kelly, of the Leasehold Knowledge Partnership charity, was quoted saying: “With the lease altered to ground rents linked to inflation, Mr Nowell would have been in a position to buy the freehold for far less than he did.”

The full statement from LKP was:

“If Trevor Nowell, 79, had not paid out £38,000, plus £4,000 in his and the freeholder’s legal costs, he would now be eligible for the Taylor Wimpey ground rent review scheme.

“With the lease altered to ground rents linked to RPI, he would have been in a position to buy the freehold for far less than he did from the speculators who now own it, E & J Capital Partners.

“Neither Taylor Wimpey nor E & J Capital Partners think they have any responsibility to Mr Nowell.

“This is outrageous. Taylor Wimpey cheated Mr Nowell, and thousands of others – it absolutely refuses to say how many – by dreaming up doubling ground rents which mortgage lenders will not lend on.

“It is time for the Communities Select Committee to summons Taylor Wimpey, other housebuilders and the murky ground rent speculators to explain their role in turning ordinary people’s homes into investment cash cows.

“Mr Nowell has been badly treated and neither company accepts any responsibility. But it is not a brilliant display of wealth creation and imaginative entrepreneurialism to leg over a 79-year-old pensioner in this fashion.”