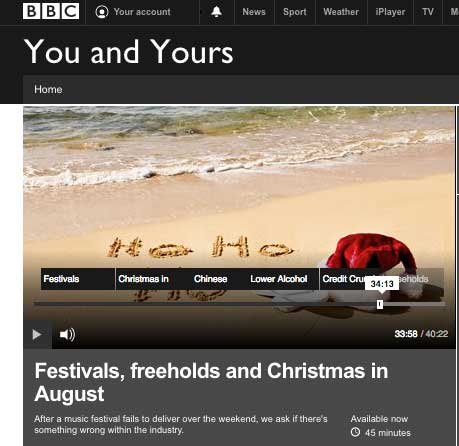 The decision by Countryside Properties plc to buy out doubling ground rent freeholds puts pressure on Taylor Wimpey to do the same, the BBC was told yesterday.

The housebuilder is the first to buy back doubling ground rent freeholds and sold on to speculators, and offer them instead to its former customers.

The BBC R4 You & Yours consumer affairs programme – which like The Guardian has given extensive coverage to this issue – said it had been described by MPs as a “national scandal” and a “con”.

The decision by Countryside Properties plc puts pressure on Taylor Wimpey to do the same and come clean about its opaque ground rent review scheme, offering to vary leases in line with RPI.

Sebastian O’Kelly, of LKP, told the programme that Taylor Wimpey needs to be summoned before the DCLG select committee.

“Taylor Wimpey is in the spotlight here. We are asking the select committee to summons Taylor Wimpey to ask how many people are affected and what it is going to do about them.”

Taylor Wimpey has repeatedly refused to give details of the scale of the doubling ground rent scandal, telling its shareholders that £130 million to sort the issue.

The money won’t be paid to ex-customers but will be used to pay off the freehold speculators who bought up the ground rents in order to vary the leases.

But the scheme only applies to ex-Taylor Wimpey customers who contact the company.

The offer does not include buyers of Taylor Wimpey resales, nor will it include those who have already paid out to vary their leases in order to sell a property.

The decision by Countryside Properties plc to buy back 10-year doubling ground rent freeholds at five sites only applies to those controlled by Winchester-based E&J Capital Partners, headed by James Tuttiett.

Other customers with 10-year doubling rents are not covered.

Baz Jafar, a flat owner at Silver Point, Edmonton, north London, said: “I am getting second-hand information from the media and I had no idea that Countryside properties plc was changing its policy to buy back its freeholds.

“Up until a few weeks ago we were emailing Ian Sutcliffe, the CEO of Countryside Properties plc, and we were being told there is nothing untoward in ten-year doubling ground rents.

“And if we had any questions concerning the lease terms we should speak to our solicitors who handled the sale.”

Countryside Properies plc told BBC R4 You and Yours that it was hoping to do a deal with Adriatic Land and that Baz Jafar should be getting a letter very soon.

Adriatic Land is an opaque fund of ground speculators, controlled by William Waldorf Astor of Long Harbour. All the companies hide their beneficial ownership behind nominee directors.

“I have heard literally nothing. I have been personally affected by this because I had an application to re-mortgage turned down.

“I have spoken to Ian Sutcliffe and I do not think he has any proposal, so far as I understand.

Countryside Properties plc told the BBC that it is looking at this and that 15-year doublers would “not be left hung out to dry”.

Mr O’Kelly said the move by Countryside Properties plc will have “considerable implications”, even though:

“We don’t even know whether this initiative involving Countryside Properties plc was its idea or whether it came from E&J Capital Partners, based in Winchester, which owns a portfolio of £280 million of freeholds.

“This is in order to get the heat off E&J Capital Partners. These ground rent funds do not like this publicity and are very anxious indeed about Sajid Javid’s review.”

“Scotland and Northern Ireland have dealt with their leasehold problems.

In Northern Ireland you can buy out the freehold for nine times annual ground rent. That would be a very welcome in England.

“And it would be ruinous for these speculators who have bought up doubling ground rents.”