Christopher Howarth is a senior researcher working in the House of Commons. Prior to this he worked for Open Europe, as a Conservative Foreign Affairs Adviser and senior researcher to a Shadow Europe Minister. Prior to 1993, the owners of flats had virtually no rights. 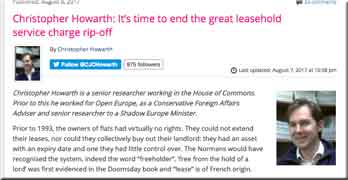 An interesting article today on ConservativeHome by Christopher Howarth, a Conservative party researcher, calling for widespread reforms of leasehold … including: stop creating more of it.

The article makes the point that the rest of the world outside England and Wales does not have leasehold, or has got rid of it, ending long-term tenancies as a form of residential “ownership”.

Like LKP, Mr Howarth appears to be unenthusiastic about the property tribunal:

“It does not have the time or interest for long and complex cases, does not take evidence on oath and is easily swayed by the legal firepower at the disposal of large landlords. It’s a small legal world, and the money and careers (of tribunal judges) are made defending landlords, not small leaseholders.”

Similarly, he has noted the unfair cost regime which cost Dennis Jackson his £800,000 Battersea flat through forfeiture (and which LKP and Sir Peter Bottomley successfully overturned).

He has also noted the more recent scandalous case of the Wellcome Trust, the second biggest charity in the world and a London landlord, spending, in fact, £114,000 to recover £6,000 from a leaseholder.

The case is now closed down with a Non-Disclosure Agreement – following the intervention of LKP, The Guardian and BBC R4 MoneyBox Live. However, we will report it in due course.

We are delighted that this high-handed bullying by the Welltrust, is known to MPs.

The Conservative researcher also understands how freeholders use legal costs to smother and silence leaseholder dissent in the courts.

Mr Howarth ends his article on ConservativeHome with a call for a number of fine reforms – including ending the creation of new leaseholds – and then asks whether government will act.

“The property lobby is very well-resourced, and has fought off many previous such attempts to improve leaseholder rights. There are many institutions with property portfolios represented in the Lords, and there is a whole legal industry lobby designed to service them, as well as the prevalence of donations from property entrepreneurs and companies.

“However, there is every hope that this Government will act. There is a big political prize to be had for the Conservative Party to improving the rights of millions of property owners and bringing them up to equality with those who own their own house free from the hold of a Lord.”

On the other hand, the Conservative party is not the only political party interested in addressing leasehold reform.

Labour’s effort in the 2002 Commonhold and Leasehold Reform Act showed a future without leasehold.

But as commonhold was not compulsory for housebuilders – and they make so much working the angles of leasehold – they were not interested.

Our freeholder calls us leasehold owners “a bunch of animals”

Peter Bottomley MP calls for a debate on leasehold reform