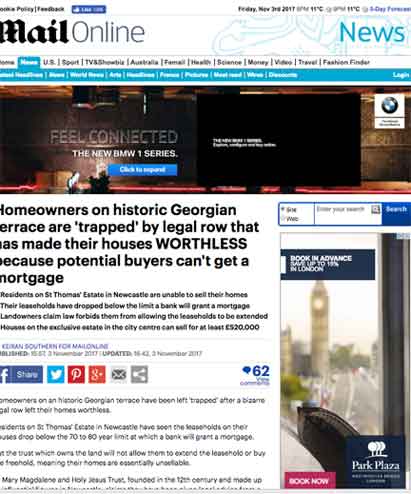 Today MailOnline reports the issue of leasehold houses in Newcastle where the St Mary Magdalene and Holy Jesus Trust is the freeholder.

It won’t extend the leases to the properties because it has received advice from “a senior QC” – whatever that means – that it does not need to.

Charities are exempt from the enfranchisement rights enshrined in the 1967 Act.

“… a situation that combines all the worst parts of Dickensian legal tragedies, Kafkaesque bureaucracy and Catch-22 conundrums with charitable oppression thrown in”.

Residents on St Thomas’ Estate in Newcastle are unable to sell their homes Their leaseholds have dropped below the limit a bank will grant a mortgage Landowners claim law forbids them from allowing the leaseholds to be extended Houses on the exclusive estate in the city centre can sell for at least £520,000 Homeowners on an historic Georgian terrace have been left ‘trapped’ after a bizarre legal row left their homes worthless.

And the Newcastle Chronicle:

​Residents of one of Newcastle ‘s most beautiful streets have claimed they have been left “prisoners in their own homes” as their properties become practically worthless. Due to a legal complication, residents of the St Thomas’ Estate are unable to extend the leaseholds on their properties or buy the freeholds, rendering them unsellable.

Although Ms Onwurah, Labour MP for Newcasle upon Tyne Central, addressed the Mary Magdalene and Holy Jesus Trust, the points she made could just as easily apply to any leasehold house owner of the National Trust or the assorted charities associated with residential freehold investments such as Wellcome Trust, or the Freshwater or Moskovitz families, who have incorporated freeholds in charitable entities.

Croydon leaseholders at Citiscape face £750,000 bill to remove Grenfell Tower cladding
Next Post: Telegraph reports case of Taylor Wimpey pensioner who has paid £38,000 for his freehold … and now won’t help him