The Office for National Statistics (ONS) has confirmed that just 4.2% of all new houses sold across England and Wales in 2018 were leasehold tenancies, down from 13.3% in 2017.

The ONS has described its decision to publish a leasehold dataset as having being influenced by the “growing public and policy interest” in leasehold issues.

The body says it intends to produce annual data on the number of transactions on leasehold and freehold property.

The ONS notes that the North West has remained the region with the highest percentage of new-build leasehold house sales.

It cites the government line that “the sale of new build leasehold houses in some areas of England is an accepted custom and practice… it is particularly common practice in parts of Cheshire, Greater Manchester, Lancashire and Merseyside.”

Last year saw 21.8% of all new houses in the North West area sold as leaseholds, which is a marked decline from 58.5% the year before.

London is the locality with the second highest number of new leasehold houses being sold, at 15.8% in 2018. 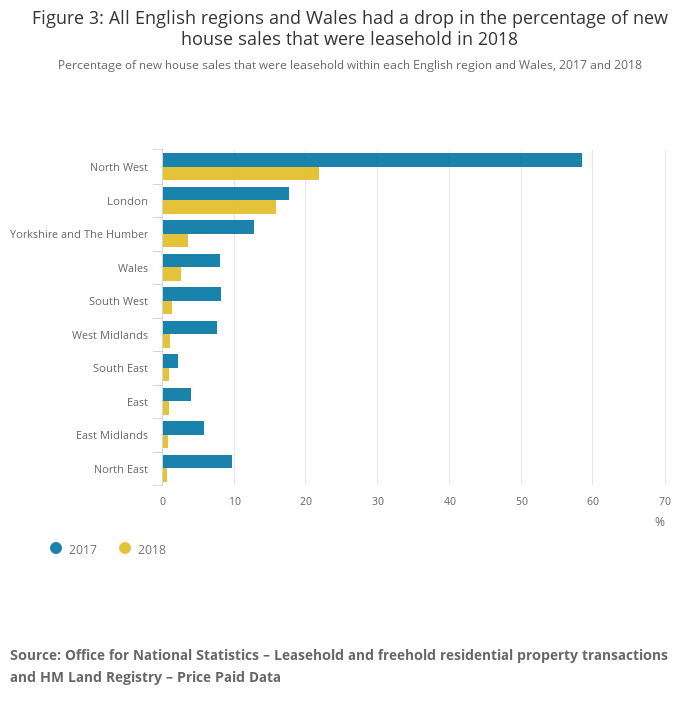 The Financial Times attributes the developer move away from leasehold houses to government action, namely the Fixing Our Broken Housing Market white paper of February 2017.

The title fails to credit the tireless work of Leasehold Knowledge Partnership.

The National Leasehold Campaign, the LKP-backed social movement set up by three house lessees the month after the selling of new-build houses reached its peak of 17.5 per cent in January 2017, is also not mentioned.

Only 0.8 per cent of all new houses were sold as leasehold last month, according to the ONS release.

However, this market change has not been driven by legislative change.

The leasehold ban on all new-build houses, first announced by Sajid Javid in December 2017, has yet to become law.

Government also has to wait until 2021 to end taxpayer subsidy of leasehold houses on Help To Buy.

As The Times notes, the shift away from leasehold is linked to the “political pressure on unfair contracts and abuses linked to tenure arrangements”, which LKP has instigated.

The number of new houses sold as leasehold has fallen sharply amid political pressure on unfair contracts and abuses linked to tenure arrangements.

In comments that will be seen as helpful to government, Nigel Henretty, head of housing analysis at the ONS, said:

“The government’s announcements about potential changes to the leasehold system may have driven the decreases.”

Although the ONS dataset is only concerned with houses, the body has chosen to use a contentious definition of leasehold tenancies:

“Leasehold properties are those that are owned for a fixed period, under an agreement with the landlord, usually known as the freeholder.”

Government has recently been criticised by campaigners for suggesting something similar, that leasehold is “a legitimate form of home ownership… [where leaseholders] are homeowners”, which contradicts the wording in its newly published How to Lease guide:

“Leasehold is a type of long-term tenancy; it is not the same as outright ownership. When you ‘buy’ a leasehold property, you do not become the owner of the property: you acquire the right to occupy it for the amount of time that is remaining on the lease.”

The ONS intervention on leasehold suggests that government is finally convinced of the need to invest in information gathering since better data can improve policymaking.

The i newspaper links leasehold ‘slums of the future’ to Help To Buy and the Tchenguiz Family Trust
Next Post: Ending ground rents will hurt leaseholders, says Long Harbour …