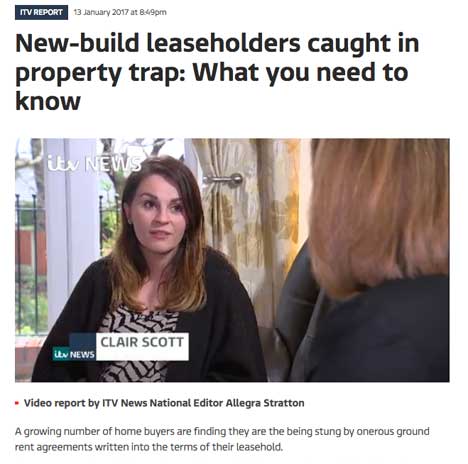 ITV News reported the “national scandal” of leasehold house sales on its flagship News at Ten programme last night. It can be viewed here

It introduced doubling ground rents between 2007 and 2011 and owners claim that these properties are difficult, if not impossible, to sell.

Ms Scott’s neighbour Andrew wrote to Theresa May about the scandal, and was filmed showing the reply. 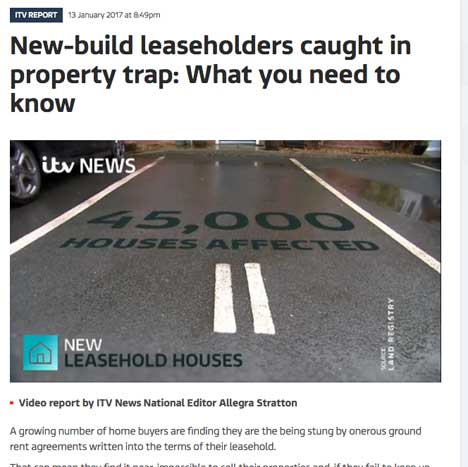 ITN News said that 45,000 new leasehold houses have been built in the last five years.

Sebastian O’Kelly, of the Leasehold Knowledge Partnership, was quoted saying:

“The developers are selling leasehold houses because they make far more money out them.

“Between £300 and £500 million is made by them from freehold sales every year. That is a colossal sum of money and they are selling freeholds for nothing: ground rents are for no service whatsoever.

“It is a national scandal.”

In another part of Bolton, ITN News featured other Taylor Wimpey customers claiming that they had used the developers’ recommended solicitors “who did not explain what they were signing up for”.

Carl Casey, who is paying £600 a year in ground rent, said of the developers:

Allegra Stratton reported that campaigners (LKP) had recently met Sajid Javid, the Secretary of State for Communities and Local Government and are “hopeful that he will crack down in the housing white paper before the end of the month.

“But until then some of Britain’s best known developers are making money apparently for nothing out of home owners up and down the country.”

The item reported that Taylor Wimpey stopped selling properties with doubling ground rents in 2011 and has undertaken not to sell leasehold houses from January 1 this year.