Taylor Wimpey has revised its sales team’s information leaflet to buyers of leasehold apartments at Sapphire Fields, in Oxfordshire.

New guidelines – apparently introduced on December 20, the day of the leasehold debate in the House of Commons – seek to make consumers more aware of what they are buying.

The leases here only apply to flats, as Taylor Wimpey is selling freehold houses at Sapphire Fields, part of 3,300 new homes at its Great Western Park development on the edge of Didcot.

Indeed, following LKP’s exposure of the company’s doubling ground rent scandal, Taylor Wimpey has announced that it has ceased the construction of leasehold houses form January 1.

[Leasehold houses have spread across the country – Persimmon being the main offender – as developers leap at the chance of creating an investment asset class at the expense of their own customers.]

This is a short lease, which means the developer is creating an investment asset class at the expense of its own customers.

Leases will evaporate in value if they get below 80 years, so the lease will have to be extended. That means an income stream for whoever owns the freehold.

The ground rent is £250pa and is “reviewed” (increases) every ten years in line with the Retail Price Index.

Customers should ask themselves: what service is the ground rent for?

This is a question asked of MPs by Philip Rainey QC.

Absolutely nothing, according to small retirement housebuilder Bob Bessell, who thinks ground rents are wrong. https://www.leaseholdknowledge.com/tag/bob-bessell

Taylor Wimpey won’t retain ownership of the freehold “in common with most developers”.

So the freehold will be sold to a life insurance company such as Aviva (if you are lucky), or to murkier investors, sometimes offshore (if you aren’t).

You are strongly advised that you should take independent legal advice

Hear, hear. And that means not appointing a solicitor recommended by any developer. That in itself is a reason not to employ that particular firm.

Leasehold conveyancing is complicated and deeply flawed, according to the Conveyancing Association. It is very important that you chose a solicitor experienced in leasehold. Contact LKP if necessary.

Anything else a leasehold buyer should know?

Yes, and quite a lot actually.

Buying a leasehold flat means that you are a tenant, just a long term one. But all issues go down the rabbit hole of landlord and tenant law, quite unlike a real freehold homeowner.

Investors in freeholds are buying far more than ground rents, and pay handsomely for them.

With a minority investment in a block of flats (often less than 5 per cent of the collective value of the flats) they control the site.

Taylor Wimpey London made a complete mess of these RMCs which ended up excluding the leaseholders and being owned by Roger Southam, then proprietor of Chainbow and, inexplicably, the chairman of the taxpayer-funded Leasehold Advisory Service.

Mr Southam was named in the Commons by Sir Peter Bottomley on December 20.

If a freeholder controls the management of the site he is on to a winner: management contract, insurance commissions, deals with contractors.

These can be worth far more than the ground rents as developers, who draw up the leases, know very well.

So who buys leasehold?

Ordinary people. First-time buyers. The old. The single. The poor. Or, in prime central London, the rich.

It is very rare indeed to encounter anyone employed in the leasehold game who does not own their home freehold. 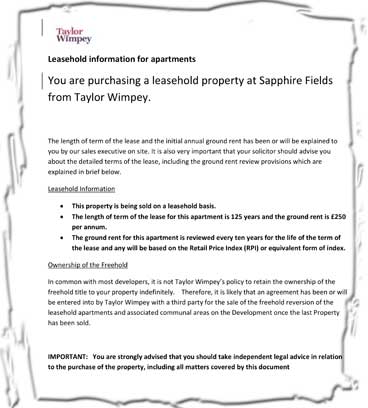