Donate
You are here: Home / Latest News / Help To Buy cheat Persimmon racks up £1bn profits – and spread the plague of leasehold houses around the country 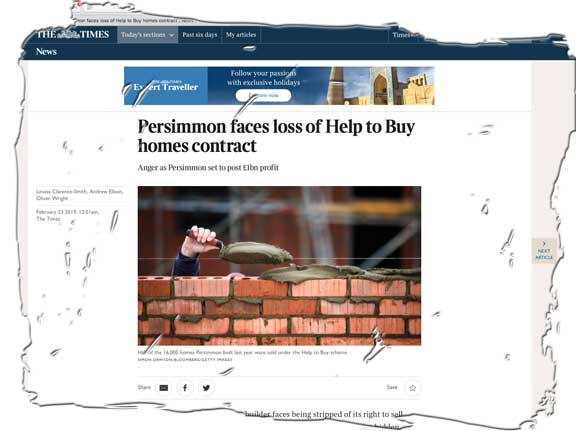 Persimmon is to make a £1 billion profit thanks to taxpayers pouring in money through Help To Buy to get young first-timers onto the property ladder.

And in return, what? The company has been the main offender in spreading leasehold houses around the country, creating homes which include an investment asset for someone else.

So, taxpayers have been subsidising the investments of private equity speculators in residential freeholds, who hide their beneficial ownership behind nominee directors and are often based offshore.

Britain’s most profitable housebuilder faces being stripped of its right to sell Help to Buy homes after allegations of poor standards and punitive hidden charges.James Brokenshire, the housing secretary, is reviewing Persimmon’s participation in the government scheme, which accounted for half of th

An example would be the £1.6 billion Long Harbour fund, run by William Waldorf Astor, the half-brother of Samantha Cameron. Here the Adriatic Land freeholds have nominee directors from the Sanne Group headquartered in Jersey.

So vital decisions concerning leasehold homes – how to remove Grenfell cladding from private blocks or flats or whether to let someone keep a cat in their leasehold property – are taken on behalf of unknown and unknowable owners.

Taxpayers have poured £8.3 billion into the Help To Buy scheme, which – insanely – is to continue unreformed until 2021.

And who is surprised by this?

“An investigation by The Times last year found that homes available under Help to Buy cost an average of almost 15 per cent more per square metre than comparable properties that were not eligible.”

The vast sums poured into Persimmon have turned its spear-carrying executives into princelings:

Booted out former CEO Jeff Fairburn was in line for a £110 million bonus – he accepted £75 million after public revulsion.

The current MD David Jenkinson, who is running the company, received £45 million.

Finally, the government has woken up to this nonsense: Communities Secretary James Brokenshire is “reviewing Persimmon’s participation in the government scheme”, which accounted for half of the homes it built last year, says The Times.

The Leasehold Knowledge Partnership has been calling for this racket to end for years.

It was owing to our efforts that the Communities Select Committee under Clive Betts MP launched its investigation – with results far exceeding our hopes.

David Jenkinson was one of the plc house builder chiefs questioned by the Select Committee.

Their  evasive answers were hardly persuasive.

The realisation is that plc house builders have systematically cheated their own customers by dreaming up wealth-sapping legal tenures, and the rest of us too – by subsidising freehold investment assets for rich speculators.