Bellway today confirmed that it is wary of a buyers’ backlash over the leasehold houses scandal.

Chief executive Ted Ayres has robustly stated that there is no such thing as a leasehold houses scandal, even though Taylor Wimpey has undertaken not to build them from January 1 this year.

Between 2007 and 2011 Taylor Wimpey built leasehold houses and flats with ground rents doubling every 10 years, which has trashed their value and made them unsellable, owners claim.

Bellway, based in Newcastle, sells leasehold houses with ground rents linked to RPI.

Bellway chief executive Ted Ayres said: “This is a problem for the industry.

“It is getting quite a lot of publicity at the moment.”

Bellway said its leases go up in line with inflation and do not double every decade.

Yet the company has infuriated many of the leading figures in the Facebook National Leasehold Campaign, including Katie Kendrick. 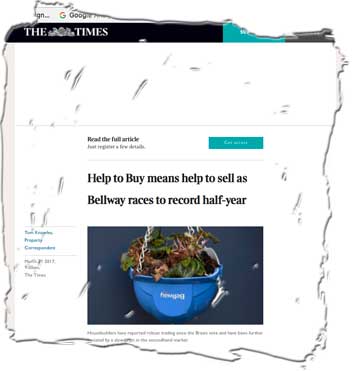 She bought her detached four-bedroom Bellway house in Ellesmere Port in July 2014, assisted by the government’s Help To Buy scheme.

Katie, who was to have addressed today’s cancelled All Party Parliamentary Group on leasehold reform at Westminster, described her case as “very mild compared to thousands caught up in the abuse of leasehold”.

She has a 150 year lease with £150pa ground rent increasing after 10 yearsrs in line with RPI, and every 5 yrs thereafter.

Yet although she bought the property in in 2014, the lease started in 2006, so she lost eight years immediately.

In fact, she had the right to buy it after two years, but Bellway could have sold her the freehold at any point, if it chose to do so.

But it didn’t. Instead, it sold the freehold 18 months later to Adriatic Land 4 (GR1) Limited, which hides its beneficial ownership behind nominee directors.

This freehold owning group is managed by the HomeGround group owned by Will Astor, who worked for leasehold gameplayer Vincent Tchenguiz for six years.

Tchneguiz, until his arrest by the Serious Fraud Office in March 2011, claimed to own one per cent of all the residential freeholds in the country, including the freehold books of McCarthy and Stone, Berkeley Group, Barratt, assorted smaller builders and defunct housing associations, and the City of Huddersfield.

For Katie to even inquire about buying the freehold, she had to pay HomeGround £108.

HomeGround would not explain how it had come up with its valuation, and after a counter offer came back with a price of £7,680.

She is now going to enfranchise through the statutory route. And she is furious with Bellway.

“We have been miss-sold our homes on a massive scale,” she says. “This is our homes. Our futures. Our children’s inheritance. But it has been sold onto greedy third-party investors.

“Who are they? We have no idea. Are they based in this country or are they offshore?”

“Bellway have never offered a ten year doubling lease. After a period of 8 years from the term commencement date, the ground rent will increase in line with the retail prices index (RPI). Following this, it will increase by the rate of RPI every five years thereafter for the duration of the lease term. The reason for this is to ensure that the ground rent remains at the same value, in real terms, as at the time when the lease was granted. Unlike those stated recently in the press, it does not double.”

Bellway Homes attempts to explain why leasehold houses are just fine. And it is self-interested rubbish …