The Advertising Standards Authority has ruled against the way the Notting Hill Genesis housing association is promoting the shared ownership of leasehold properties.

It ruled that “home ownership starts with us” was over-stating a vulnerable tenancy arrangement, and the case was reported in The Daily Telegraph yesterday.

One of Britain’s largest housing associations has been forced to scrap an advertising campaign that implied its shared ownership scheme was equivalent to home ownership. The Advertising Standards Authority (ASA) ruled Notting Hill Genesis – which owns 55,000 properties in London and the south-east – misled consumers by comparing its scheme in contrast with renting.

“The ASA considered that consumers would understand the claim: ‘I own a 2 bedroom apartment’ alongside text which stated ‘and pay less per month than my friends pay to rent a room in a flatshare!’ as a comparison between the monthly cost of paying rent to a landlord for a room in a shared home, and the monthly cost of paying a mortgage on a property, rather than describing any more complex arrangement.

“That impression was furthered by the fact that the words “I own” and “pay less per month” were bolded and by additional text which stated “HOME OWNERSHIP STARTS WITH US”.”

“We strongly disagree with the findings of the ASA on this issue.

“Leaseholders have always been, and still are, homeowners. This view is supported by government, which has a section on affordable home ownership schemes – including advice on how to buy through shared ownership.”

House builders, which include the housing associations, talk up leasehold as home ownership when it comes to selling the long lease agreements, but are quick to remind buyers that they are in fact tenants when it comes to paying up service charges or dealing with disputes.

In every law concerning leasehold the owners of the leases are referred to as “tenants”, and LKP has long argued that using this term would allow consumers to make more informed decisions.

By ordering Notting Hill Genesis to pull its advertising, the Advertising Standards Authority has put the focus on the marketing of other shared ownership schemes.

It may embolden other would-be buyers or existing leaseholders to lodge further complaints with the ASA.

The ASA decision is the culmination of months of lobbying by ex-leaseholder Dr Anne Heelan, who featured in the Telegraph last year after losing £100,000 in dispute with a freeholder who blocked her attempts to sell on the open market and threatened forfeiture. She took her case to the High Court, where he entered no defence then proceeded to force her to sell the lease to him at cut-price.

Shared ownership is an assured tenancy arrangement that renders tenants even more vulnerable to repossession in any money dispute than the rules surrounding forfeiture for leaseholders.

Only those who manage to buy additional shares to staircase to 100% “ownership” become leaseholders.

I want to put this post in context: (a) I write this post for myself and do not necessarily speak on behalf of the other NL writers. (b) I have enormous respect for Shelter. I have friends who work there. I make regular donations to Shelter.

Although Dr Heelan’s original complaint focused on leasehold not amounting to home ownership – regardless of the percentage of the lease owned – the ASA has limited the scope of its ruling to the issue of shared ownership not being featured prominently enough in the advert.

An open question is whether the marketing of shared ownership by the Home Group also falls foul of the ASA ruling. This advert was spotted on a London Underground train last week: 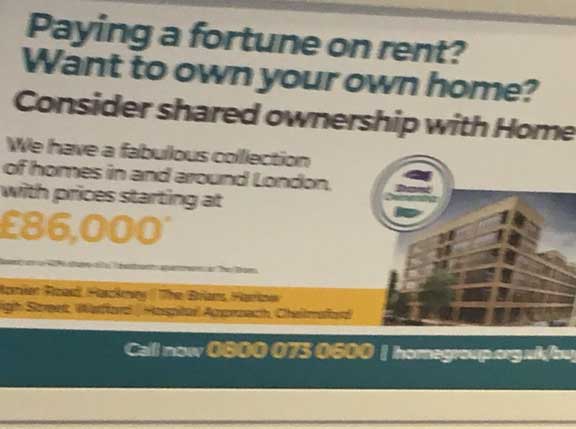 The actions of housing associations passing off leasehold as home ownership stands in contrast to the usually unflatteringly referenced practices of car dealers. They are scrupulous in reminding those leasing a vehicle that the user does not “own” it and it will revert to the garage if monthly payments cease.

The National Association of Estate Agents has been fiercely critical of leasehold as a form or tenancy, in a report which was widely publicised in September last year.

So it seems as though house builders and the government are alone in wishing to mislead the public into thinking that leasehold tenancies are something that they are not.

London mayor Sadiq Khan launches leasehold advice portal and slams LEASE as ‘unfit for purpose’
Next Post: Help To Buy cheat Persimmon racks up £1bn profits – and spread the plague of leasehold houses around the country