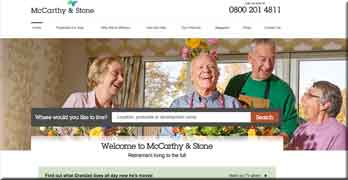 The Advertising Standards Authority has again rejected leaseholders’ complaints that leasehold properties should not be marketed as “homeownership”.

The complaint was raised separately by veteran leasehold activists Susan Wood and Michael Hollands. Both received replies from “a complaints executive” at the ASA on May 17.

Both complaints concerned adverts by McCarthy and Stone, and both were rejected because the adverts did not unambiguously assert that leasehold flats were “home ownership”.

For Ms Wood, this was the second attempt this year to get the Advertising Standards Authority to deal with this complaint.

“You rejected my complaint on the grounds: “The issue of ‘ownership’ in terms of leasehold & freehold is something we feel prospective buyers will be familiar with”.

“However, when my late father bought a McCarthy & Stone retirement flat some years ago, neither he nor his family understood the implications of leasehold.

“Our previous experience of property ownership had been entirely ‘freehold’, and we felt misled by the advertising surrounding the leasehold flat.  I made a similar complaint to yourselves in 2012, but you rejected this, using similar terminology.

“Also, I have been contacted by others who most definitely did not understand what they were letting themselves in for when buying leasehold.  I gather some of them have made complaints to you in the past as well – all of which were rejected.

“The distinction between freehold and leasehold is particularly topical, in the light of the ‘Grenfell-type’ cladding, which has landed unwary leaseholders with either eye-watering bills (for buildings they do not actually own), or unsaleable properties.

“There is also the scandal of new houses being sold with leasehold title, reported recently in the national press.  I therefore profoundly disagree with your belief that prospective buyers are ‘familiar’ with the leasehold/freehold distinction.  If they did so, they would not be in the difficulties they are now finding themselves in …

“In the light of the above, I would be grateful if you would look again at my complaint.”

However, on May 17 the complaints executive of the Advertising Standards Authority, responded:

“While I recognise the objections to the use of such language in reference to leaseholds by yourself and others of the Leasehold Knowledge Partnership, it is our role to consider how the wider public are likely to interpret this terminology.

“We did not consider that phrases like “privately-owned” and “for sale” were likely to mislead consumers into thinking that these were freeholds properties.”

These appear to be two points not made by Ms Woods: you can certainly own a lease privately and, of course, it can be “for sale”: what it isn’t, is freehold home ownership. It is a tenancy, as is made clear in all legislation and court references to the tenure.

The ASA continues: “Aside from these phrases we also did not see anything else in the ad to imply that it was promoting freehold properties.

“I recognise that you feel that this is a particularly topical issue; however I can confirm that we see no evidence in terms of complaints we have received about the issue which would indicate that this is a widespread issue worthy of intervention under the Code.”

Also on May 17, Mr Hollands was told by the ASA:

“I understand that you feel that the references to the “homeowners’ lounge” and references to the properties being “purchased” misleadingly implies that the advertiser is promoting freehold properties.  We have looked into your complaint carefully and considered all the issues raised.  On this occasion, our decision is that we will not be taking further action.

“Advertising is considered to be misleading if it causes, or is likely to cause a consumer to make a decision they would not have otherwise taken.

“Whereas I recognise that it is the opinion of yourself and others of the Leasehold Knowledge Partnership that such terminology misleadingly implies a freehold, in assessing an issue like this we need to take into account how consumers are generally likely to interpret an ad.

“From a consumer understanding perspective, we do not consider that these terms are likely to be interpreted as solely referring to the purchase of freehold property.

“For these reasons, the ad does not break the rules on the basis you suggest.”