Do any of the plc housebuilder CEOs ACTUALLY live in their leasehold products? 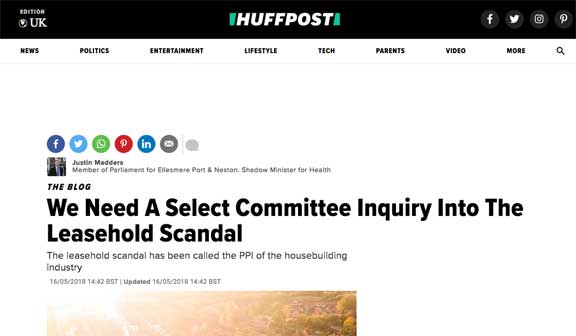 The government is talking tough about sorting out the leasehold scandal – which has put the lives of at 100,000 homeowners on hold – but those who introduced these toxic leases into the housing market have not been held to account, says Justin Madders MP.

Mr Madders, the deputy chair of the APPG on leasehold reform and Labour MP for Ellesmere and Neston, writes in the Huffington Post:

“It is a bitter irony that the vast majority of those culpable for the current state of affairs are likely to be the least affected by it. I am happy to be proven wrong, but I doubt that many if any, of those at the top of the biggest developers are enthusiastic enough about their leasehold properties to actually live in one.

“It is important that we recognise that the rapid expansion of leasehold housing schemes did not occur by chance. This system was carefully and deliberately engineered to exploit would be homeowners for no other purpose than to supplement the profits of an already lucrative industry.

“It is no coincidence that at the profits of the biggest developers have increased by almost 400% in the past five years, at the same time that leaseholders were discovering that the ownership of their dream home now formed part of an investment vehicle in a tax haven.”

Mr Madders urges the Communities Select Committee to haul in the house builder CEOs, including Pete Redfern, the boos of Taylor Wimpey, who was pontificating about the housing crisis in a Labour party report while presiding over one of his own

How many homes with doubling ground rent has Taylor Wimpey sold.

Where are they? A complete list please, with no nonsense about commercial sensitivity.

Why is your ground rent review scheme only eligible to your former unfortunate customers who get in touch? What efforts are made to contact all disadvantaged home buyers?

Why is the ground rent review scheme not open to those who bought resale properties (and, it appears, were just as uselessly served by conveyancing solicitors as those who employed the legal stooges insisted upon by Taylor Wimpey in the first place?

We Need A Select Committee Inquiry Into The Leasehold Scandal

The leasehold scandal has been called the PPI of the housebuilding industry and has mobilised thousands of people up and down the country, with good reason. Many people have discovered they were misled about what they were signing up to.

“When did developers begin to offer new homes on a leasehold rather than freehold basis and why?

“What is the justification for onerous ground rent clauses?

“What were developers reporting to shareholders at the time about this additional revenue stream?

“What is the extent of other ongoing charges that are attached to properties(as opposed to the lease) What kind of deals were struck with the new freeholders and why did they not first offer their customers the opportunity to buy on the same terms?

“Who are those freeholders and how much do they value their interests at?

Why were some buyers required or induced to use solicitors recommended by the developer?
:How did the lenders and the lawyers miss the fact that these leases might render the homes unsellable?

“As well as developers, lenders and lawyers, I am also still to hear any recognition of the role that Government backed schemes played in encouraging the expansion of leasehold housing and whether this was anticipated at the time.

“While I have little doubt that Ministers introduced the ‘Help to Buy’ scheme with the best of intentions, the truth is that in many areas, it would have more accurately be called ‘Help to Rent.’

“According to my own research undertaken in Ellesmere Port & Neston, those purchasing a leasehold property through the Help to Buy scheme were significantly more likely to use a solicitor recommended by the developer, which is important because 92% of those who used a recommended solicitor told me that they were not fully informed of the ground rent terms when they bought their home.”

“The result is they have been sold the illusion of home ownership with the true owner of their property likely to be an unaccountable, faceless investment company based offshore.”

The government wants to know if you have an onerous lease
Next Post: Advertising Standards Authority again rejects complaint that McCarthy and Stone is passing off leasehold tenancies as ‘property ownership’