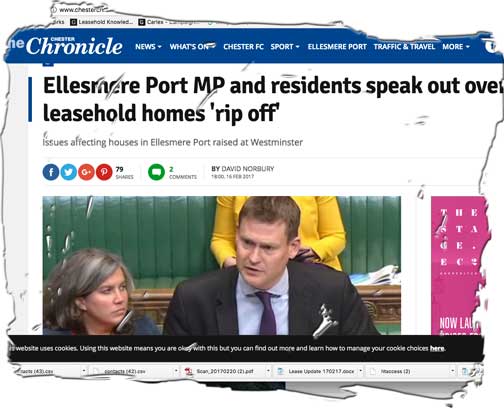 Justin Madders, Labour MP for Ellesmere Port and Neston, has said that escalating ground rent, games over buying the freehold– discovering it would cost them three or four times what they were originally promised were:

“The PPI of the house building industry.”

Mr Madders has called on ministers, along with other MPs who represent areas where a large number of leasehold homes are now being built, to end what he described as ‘the PPI of the house building industry’.

Major developers including Bellway, Redrow and Taylor Wimpey were cited, with Taylor Wimpey since pulling out of leasehold sales.

Mr Madders also asked for the Government to ensure existing homeowners with leases are compensated.

When housing minister Gavin Barwell MP indicated some developers were no longer going to continue selling leasehold properties, Mr Madders said: “It is welcome that this practice is not going to continue but my constituents are anxious to know what the Government can do to deal with the onerous conditions that exist in leases already.”

Homebuyer calls for Persimmon boycott, and local MP Andrew Selous agrees with him!
Next Post: Banker leaseholders spend £50,000 to reform the paw law