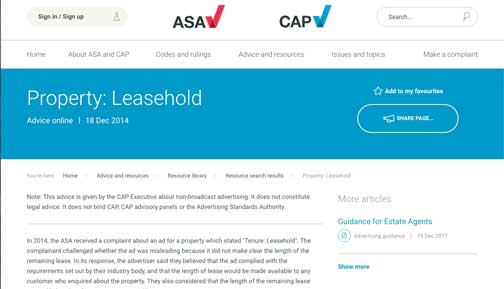 This is quite an interesting ruling by the Advertising Standards Authority (for which, thanks to Michael Holland):

In 2014, the Advertising Standards Authority received a complaint about an ad for a property which stated “Tenure: Leasehold”. The complainant challenged whether the ad was misleading because it did not make clear the length of the remaining lease. In its response, the advertiser said they believed that the ad complied with the requirements set out by their industry body, and that the length of lease would be made available to any customer who enquired about the property. They also considered that the length of the remaining lease was unlikely to be of concern to a potential buyer.

The Advertising Standards Authority noted that the number of years left on a lease could affect one’s chances of obtaining a mortgage, could impact any potential resale of a property and that majority of lenders were likely to refuse a mortgage if the lease had between 50 and 75 years remaining. A small number of lenders might refuse mortgages if the lease had fewer than 95 years remaining. In this case, the Advertising Standards Authority did not uphold the complaint because the number of years remaining, 101, was considered to be sufficient (Chesterton Global Ltd, 26 November 2014).

Getting an Advertising Standards Authority ruling against aspects of leasehold property marketing would be very useful ie that it is not homeownership but a tenancy.

Developers talk incessantly about “homeownership”, “your home”, “your property” when flogging these tenancies – and then tell you that you are a tenant when demanding ground rents, when you want to build a conservatory or keep a cat in a flat. Then you are just a leaseholder who has to pay up.

And, of course, estate agents invariably fail to give the years remaining on a lease.

LKP’s essential leasehold guide in The Sunday Times … feel free to add
Next Post: How scam values on equity release loans affect leaseholders. And YOU need to stop it …