Donate
You are here: Home / Latest News / Complain to Advertising Standards Authority over ‘virtual freehold’ and ‘home ownership’ when the offer is leasehold tenancy 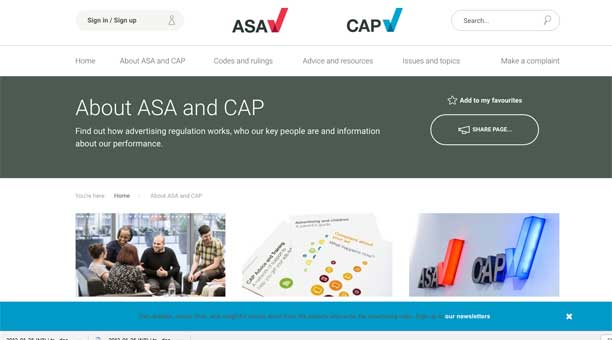 A veteran leasehold campaigner from Carlex earliest days, Susan Wood, has just repeated a complaint to the Advertising Standards Authority about leasehold tenancies being described as “home ownership” that she first made in 2012.

Her first complaint concerned Churchill Retirement. Now she complains about McCarthy and Stone describing their flats in an advert in Saga magazine as “your own privately owned home”.

Housebuilders and estate agents and conveyancing solicitors and valuers – and all the others on the leasehold bandwagon – are very keen to emphasise to new buyers the virtues of “virtual freehold” and “home ownership” when selling a leasehold tenancy.

They are very much less keen on this when they are after your money: then you are “tenants” with an obligation to pay up what the landlord thinks appropriate. And if you don’t, there is always debt-collectors JB Leitch solicitors and equivalents there with their menacing F-words: for Forfeiture. 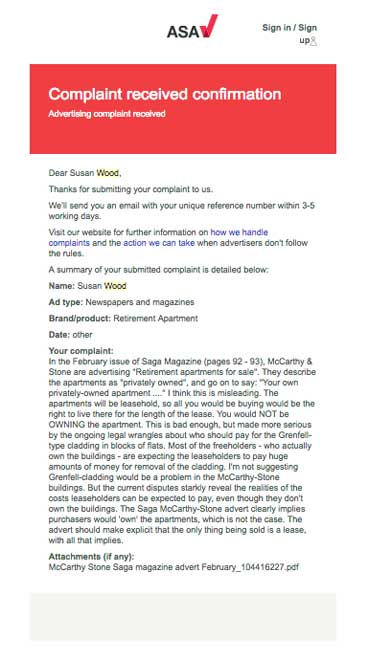 And below is the response in January 2012. In those days there were only a handful of us concerned about the abuses of leasehold, and most were active in retirement housing.

And here is the response to Susan Wood from the Advertising Standards Authority:

Your complaint
I understand that you felt this ad was misleading. We have looked into your complaint carefully and considered all the issues raised. On this occasion, our decision is that we will not be taking further action.Our rules
Advertising is considered to be misleading if it causes, or is likely to cause a consumer to make a decision they would not have otherwise taken.
Our decision
The issue of “ownership” in terms of leasehold and freehold is something we feel prospective buyers will be familiar with. While strictly true that a person buying a leasehold property will not “own” the property in the same sense as a freehold, we do not feel it is unreasonable to describe possession of a leasehold property as “ownership”. Leaseholds generally last a very long time and holders are fully responsible for the property over the life of the leasehold; the use of terms like “own” and “purchase” are widely used to describe the buying and selling of flats, apartments and other properties where the entire freehold of a building is not bought. It is also perhaps worth noting that this is not something which the ASA generally receives complaints about – while our assessments are not dependant on consumer response, the volume and type of complaints we receive give an indication of how ads are being received. While we understand the point you raise, therefore, we consider this terminology unlikely to generally mislead.For more information about our work, please visit our website, www.asa.org.uk.

Your complaint will be kept on file and will be used for future consideration. Thank you for contacting us with your concerns.

All complaints would need an example of the use of the term complained of, whether “virtual freehold” or “home ownership”.

This was an issue discussed with LEASE at one roundtable, with both chairman and CEO vehemently defending the use of “home ownership” as an adequate term to describe a lease contract (needless to say).

Of course, some leases are short; others are very short. What on earth does “home ownership” mean in these contexts?

Susan Wood went on to lead a court action against rip-off retirement exit fees on sale of her dad’s flat: it failed, but caused much concern in the Tchenguiz organisation who sent a barrister from London up to Sheffield with the strategy to get the dispute out of the small claims court, where it could not crucify her on costs. In fact, the action failed – as lay applicants invariably do against barristers.

LKP was going to the Advertising Standards Authority with the misleading “virtual freehold” nonsense put out by both McCarthy and Stone and Persimmon at various times. But both dropped the hyperbole from the sales blurbs once we complained.

Susan Wood failed in her court struggle earlier this week to be reimbursed the £1,150 in exit fees paid when her late father’s flat was sold in 2010. Wood argued that as the fee was for a service that was not carried out – ostensibly to vet the capability of the flat’s purchaser for “independent living” – she should receive the money back.

Many thanks to Sue Wood for reminding us of this issue.

Quickly and easily submit your ad complaint with us online.

Thank you for forwarding me a copy of the ad and for your continued patience while we have assessed your complaint.

As you know, we assess the content of ads against our Code. Amongst other things, we take action if we feel that an ad is likely to provoke serious or widespread offence, to mislead or to cause significant harm. We have reviewed this ad in light of your complaint but I’m afraid that we do not have grounds for further action under our Code.

I understand you find the claim that residents will own 100% of their property misleading because the properties are on a leasehold rather than freehold and therefore they will only own the right to live in the property.

I appreciate your point but we feel it is clear from the context of the ad that the reference to 100% ownership is made in terms of the 10% deferral on payment and the fact that while buyers will only pay for 90% of the property, they will retain ownership of the remaining 10% rather than the seller.

The issue of “ownership” in terms of leasehold and freehold is a separate one and something we feel prospective buyers will be familiar with it.

That is because leaseholds generally last a very long time and holders are fully responsible for the property over the life of the leasehold. On balance, while we understand the point you raise we consider it unlikely that readers will be mislead to their detriment by the ad.

I’m sorry if this was not the response you were expecting but thank you nonetheless for taking the time to contact us. Further information about the ASA and the work we do is available on our website, www.asa.org.uk.

Law Commission sets out how it hopes to create a better deal for leaseholders – and look at alternatives
Next Post: Barratt pays out to remove Grenfell cladding at Citiscape