Donate
You are here: Home / Latest News / Barratt pays out to remove Grenfell cladding at Citiscape

Other freeholders and housebuilders should do the same, says Sajid Javid

Last night it was announced by Barratt that it would pick up the £2 million fire marshal and Grenfell fire cladding bill at Citiscape in Croydon.

“Following the recent ruling that the costs for necessary recladding at Citiscape will fall on the individual apartment owners, many of whom were originally Barratt customers when it was built in 2002, we have decided that we will pay for the work.”

“Citiscape was built in line with all building regulations in place at the time of construction. While we don’t own the building or have any liability for the cladding, we are committed to putting our customers first. The important thing now is ensuring that owners and residents have peace of mind.”

It is believed that Citiscape is the only Barratt site with Grenfell-style cladding.

In March the 95 leaseholders lost a FTT property tribunal case to establish liability.

The case had been brought by FirstPort, which is embedded in the tripartite lease at the site as the manager.

The 95-flat Citiscape site, of two blocks with a car park, was built by Barratt 2001 and the freeholder is Proxima GR Properties, one of the freehold-owning companies of Vincent Tchenguiz that ultimately belongs to the so-called Tchenguiz Family Trust based in the British Virgin Islands.

The following from Anuj Vats and Sikrant, who are leaseholders at the site:

The Citiscape Leaseholders are ecstatic and celebrating with great sign of relief after ten long stressful months of financial uncertainty. The Citiscape RA Committee was informed yesterday that Barratt Development PLC (Barratt) would step-in to pay for both the Re-Cladding and Fire Marshall’s costs for the development.

This announcement comes from Barratt after months of closely following this case in the Media, FTT and discussions with the Service Management Company (FirstPort).

Barratt is purely doing this to take care of their customers who have bought the properties from them on the back of FTT Hearing and in line with their commitments to put customers first.

Barratt stated they accept no liability for this repairs of the development. However, as no one else was stepping forward to do anything for the leaseholders who had bought the building from the developer they have decided to take care of its customers.

The Citiscape leaseholders are thankful from the bottom of their hearts for this kind gesture by Barratt. Santa comes early to Citiscape this year were the expressions used to welcome this great news from Barratt.

Other Developers  and Builders should take a lead from Barratt and follow them saving thousands of lives and homes.

Local MP Steve Reed, who has championed the leaseholders, said:

“This is fantastic news for residents in Citiscape who were facing unaffordable debt to make their homes safe. But this applies only to Citiscape.

“The Government’s intransigent refusal to set out a plan to remove flammable cladding wherever it’s found has left tens of thousands of residents living in fear. Instead of relying on the goodwill of builders the Government must accept responsibility for the failure of their safety regulations and take all flammable cladding down before there’s a repeat of Grenfell Tower.”

The decision is satisfies the hopes of Communities Secretary Sajid Javid: he has been calling on housebuilders “to do the right thing” and pay for cladding removal. 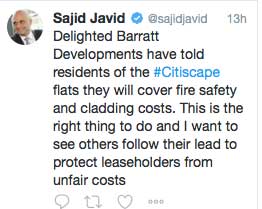 The DHCLG issued this press release this morning:

Barratt Developments to pay for fire safety related costs in a building they developed, relieving the building’s leaseholders of this burden.

Housing Secretary, Sajid Javid, last night (Thursday 19 April) welcomed the decision from house builders Barratt Developments to pay for fire safety related costs in a building they developed, relieving the building’s leaseholders of this burden and ensuring that the building will be made safe.

Leaseholders living in the Citiscape development in Croydon were told at a residents’ association meeting last night of Barratt Developments’ decision. The company has said they will cover future and backdated costs relating to employing a fire warden and the removal and replacement of unsafe cladding from this building.

From the outset Sajid Javid has been clear that building owners in the private sector should follow the lead of the social housing sector and not pass on the costs of essential cladding replacement to leaseholders.

Government has been in discussions with private sector landlords, freeholders and house builders directly, including Barratt Developments, regarding this matter. While Barratt is not the current freeholder or managing agent, as the original developer of the building they have agreed to cover these costs.

“I applaud Barratt Developments’ decision to cover the costs of fire safety works. They have listened to the concerns of Citiscape residents, engaged with government and have done the right thing.

“Other building owners and house builders in the private sector should follow the example set by Barratt Developments to protect leaseholders from costs and begin essential fire safety works. I want to see all leaseholders in this position get the peace of mind they deserve and I am keeping this under review.”

The open question now is what about the other sites, such as nearly 1,000 flat New Capital Quay, in Greenwich, where the bill is £20-£40 million?

Neither Galliard Homes, which only completed the site four years ago, is the freeholder and monopoly estate agent on the site, nor the NHBC warranty provider want to pay up.

Both are using the plight of the leaseholders, whose lives are stalled as their properties are being valued at 10 per cent of what they paid for them. 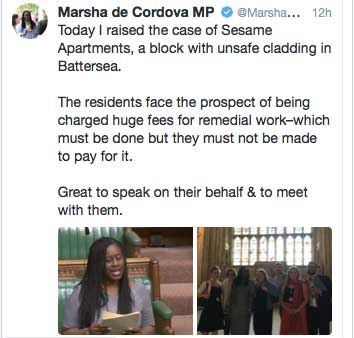 Complain to Advertising Standards Authority over ‘virtual freehold’ and ‘home ownership’ when the offer is leasehold tenancy
Next Post: Sesame Apartments: Yet another anonymous Long Harbour freeholder demanding £2.2 million over Grenfell cladding