Barratt has insisted on the evacuation of the Citiscape tower block which has Grenfell cladding.

It is understood that engineers for the developer have found flaws in structural piers at site, and that residents are being rehoused immediately.

It is anticipated that most residents in the 100 flats will only be evacuated for a few weeks. But ground and first floor residents have been told they could be out of the building for more than six months.

The residents were told about the evacuation by property manager FirstPort, which is the management company embedded in the tripartite leases at Citiscape. 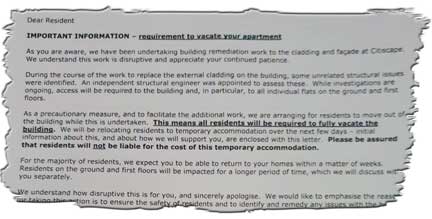 Barratt has undertaken to bear the costs of removing the Grenfell cladding at Citiscape, even though the site was completed in 2002.

LKP and the leaseholders have applauded Barratt’s decision to pick up the bill, as warranties for the structure would be long expired.

Barratt responded to pleas for some some social responsibility among developers: the issue of whether this cladding should ever have been erected in the first place is an issue between them and the building regulators.

Ministers had repeatedly urged the owners of the freehold income streams to pay up, in this case the Tchenguiz Family Trust, based in the British Virgin Islands. None has done so.

LKP has asked Barratt and FirstPort that service charges do not apply when the flats are empty owning to the evacuation.

We have also asked that the likely refurbishment of ground and first floor flats be completed without being charged to the leaseholders.

We are also curious to know what happens to the ground rent for a building that is empty.

There are also questions concerning flats which are occupied by short term tenants.

The discovery of Grenfell cladding in private blocks of flats has revealed the utter pointlessness of third party speculators in residential freeholds in the housing sector.

Although their lobbyists portray them as long term “custodians” and professionals, their expertise is in extracting and gearing up the income streams in blocks of flats.

They ignored the pleas of ministers to contribute to removing the Grenfell cladding, as LKP told ministers they would.

The fundamental absurdity was this: with the bill dumped on leaseholders, they were at one remove from being able to do anything about it. Because they are only tenants in English law, they had to persuade for the utterly uninterested freeholders to sue the government regulators or the house builders for the decision to clad their homes in inflammable material.

Where’s the profit in that, ground rent speculators might ask?

In Scotland’s Glasgow Harbour, which also has Grenfell cladding, the flat owners – being really owners not tenants – had a direct legal contract with the developer who built the site. In fact, Taylor Wimpey built the site and is paying for the cladding removal.

LKP deplores many practices of our wretched house-building sector, but we strongly applaud both Barratt and Taylor Wimpey for their social responsibility over the cladding issue.