FirstPort says: “Currently, and whilst the works are ongoing, it will not be possible for residents to access the building. We are, though, working to see how we can retrieve possessions as far as is practicable. Last week we were pleased that the engineers were able to recover some smaller possessions on resident’s behalf after they agreed a process where the contracting team could collect as they undertook the works. The props required to stabilise the building means removing large items and furniture will be more challenging but we will actively look at options for this once the stabilisation works are completed, and will advise residents once we know more.”

Authorised personnel at the Grenfell cladding site Citiscape, in Croydon, have been allowed back into the site to retrieve residents’ possessions after engineers made safe serious cracks in the building’s structure.

This means the residents of the 97 flats, including tenants, may have obtained essential personal effects,  three months after they were evacuated.

Structural defects were discovered at Citiscape after Barratt stepped in to remove the Grenfell ACM (aluminium composite material) cladding at the site, which it originally built in 2002.

The Leasehold Knowledge Partnership, and MPs in the All Party Parliamentary Group on leasehold reform, have praised the house builder for its social responsibility in intervening at a site where it has no established liability.

The freehold is owned by Vincent Tchenguiz’s Proxima GR Barratt, ultimately owned by his Tchenguiz Family Trust in the British Virgin Islands.

In March 2018 a property tribunal ruling established that the leaseholders would be paying to remove the cladding, not the freeholder: a ruling echoed on four other occasions at similarly blighted cladding sites.

But the following month Barratt volunteered to fund the cladding removal at the site, even though it has no legal involvement in it.

In September the site was evacuated after cracks were found in the lower floors.

Today Private Eye has made public the issues at Citiscape, suggesting that winds were in danger of bringing the whole edifice down. 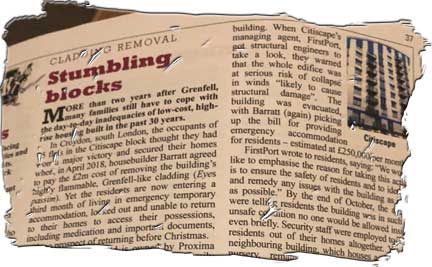 It also reported leaseholders’ suspicions that the developer might use the defects of the site as an excuse to rebuild a bigger replacement.

That would be unlikely.

Barratt is in for a much higher bill than it originally envisaged: it is costing £250,000 a month to rehouse the residents.

But if Citiscape were to be rebuilt the beneficiary would be freeholder Vincent Tchenguiz, who ignored then Communities Secretary Sajid Javid that the freeholder “do the decent thing” and pay to fix the cladding issue.

LKP always argued that that was unlikely: not least because the ground rent and permission fee income at Citiscape would be trifling compared with the multi-million bill to remove the cladding.

Ministers and officials insist on understanding freeholders as the “building’s owner”, as opposed to simply punters who own the building’s income streams.

LKP has long argued that the presence of unnecessary third-party speculative owners of freeholders make the cladding issues more complicated to resolve.

Now that other forms of cladding need to be removed from thousands of sites – dwarfing the issues surrounding private buildings with Grenfell ACM cladding – leasehold ownership structures are going to come under exacting scrutiny.

Will this sector, which we believe is ripe for reform, stand up to it?

We believe not, as explained here:

Cladding crisis: How worse can it get?
Next Post: LKP patron Jim Fitzpatrick retires as one of Labour’s most respected MPs