Donate
You are here: Home / Latest News / Redrow: ‘shoddy workmanship and leasehold games’, but bumper profits from Help To Buy 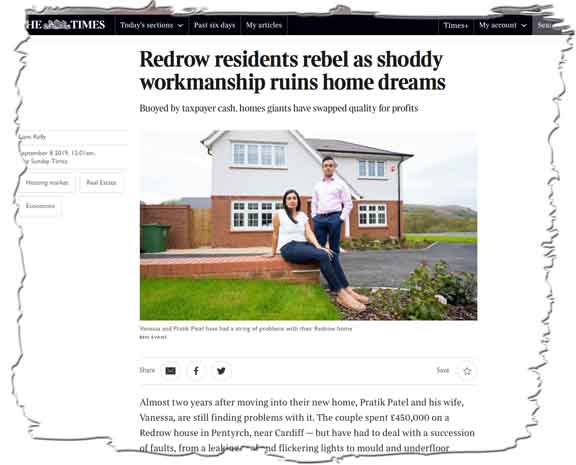 But 40% of those profits come from the taxpayer subsidy of Help To Buy, and The Times was unhappy with build quality and leasehold issues as well.

Almost two years after moving in, Pratik Patel is still finding problems with his home.

The Times focussed on Lyon Square, a two-year-old block of Redrow flats in Harrow on the Hill, northwest London.

Nik Patel, spent £367,500 on a one-bedroom apartment, but he has had leaks in the car park, broken gates, hot water outages and wrangles with the management company appointed by Redrow. “I wish I’d never gone to the sales office that Sunday,” he said.

More than 2,000 builders use the Help To Buy scheme, where the government offers buyers who have a 5% deposit an interest-free equity loan of up to 20% of the purchase price — or 40% in London.

Take-up is accelerating. The government extended £3.5bn of Help-to-Buy loans in the year to
March, helping fund the purchase of 52,303 properties. While it has helped to increase housing stock, with 222,000 homes built last year, critics say it has inflated builders’ profits and share prices, as well as house prices.