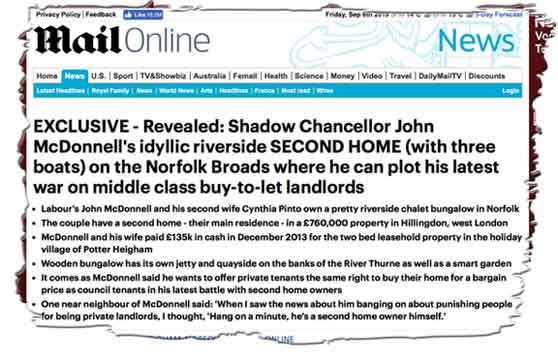 The Daily Mail has tried to smear shadow chancellor John McDonnell over his modest Norfolk holiday chalet, worth £170,000, which is leasehold.

The only public interest argument for this article was that John McDonnell “was accused of hypocrisy over his plans to clamp down on buy to let landlords after it was revealed that he and his wife are second home owners”.

Er, that would be … accused of hypocrisy in the Daily Mail editorial conference before the editor decided that the article should run.

As it happened, one cafe regular revealed sensationally:

“He is a nice guy. He comes to Norfolk to relax. Nobody around here bothers him.”

Labour’s John McDonnell and his second wife Cynthia Pinto own a pretty riverside chalet bungalow in Norfolk The couple have a second home – their main residence – in a £760,000 property in Hillingdon, west London McDonnell and his wife paid £135k in cash in December 2013 for the two

The Daily Mail said that John McDonnell and his wife Cynthia Pinto paid £135,000 in cash in December 2013 for the two bedroom chalet.

The freeholder is the Environment Agency, and in common with other leaseholders in the area, they are shareholders in the Thurne Bungalow Management Company which manages their homes.

It seems a harmonious arrangement, except the property only has 63 years left on the lease, so will be depreciating in value.

But what about the hypocrisy of John McDonnell renting the place out?

In other words, there was piffling justification for the story at all.

But handy to know that there is another potential leaseholder ally in the Commons. And, who knows? Perhaps government.