Donate
You are here: Home / Latest News / Are half the right to buyers in housing minister’s Croydon constituency on housing benefit? 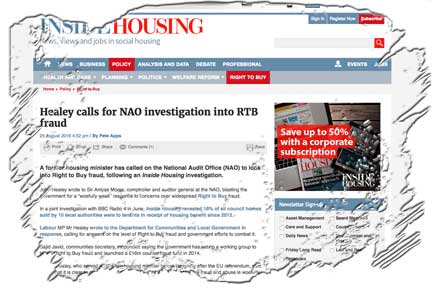 Around half the council flats sold under right to buy in the Croydon constituency of housing minister Gavin Barwell were sold to tenants on housing benefit, it is reported.

This means that the new owners – who will now be leasehold owners in most cases – are being subsidised by someone else putting up the money to get a mortgage.

The finding was made in a joint investigation by BBC Radio4’s File on Four and Inside Housing newspaper, which covers the social housing sector.

Birmingham was another area where around half the sales were to council tenants on housing benefit.

A sale to a tenant on housing benefit does not prove fraud, but has been described as a “red flag” by Mick Hopkins, executive officer at the Local Authority Investigation Officers Group (LAIOG).

“It wouldn’t necessarily be fraudulent, but it would be a red flag where you would expect councils to go through due diligence,” he told Inside Housing.

The report amounts to serious criticism of the Cameron government’s enthusiasm for right to buy, which is supposedly to be extended to 1.3 million housing association tenants.

This has been strongly criticised by numerous commentators, including LKP, as a strange priority giving the housing crisis. Tenants in housing associations enjoy the kind of security of tenancy tenants in private housing can only dream about.

Should taxpayers be subsidising their aspirations for home ownership, when so many in rented accommodation are very unlikely to be able to buy at all?

Former Labour shadow housing minister John Healey, who resigned after the EU referendum, has called on the Department of Communities and Local Government
for details on the level of right to buy fraud and government efforts to combat it.

“I regret that it is clear to me that the government’s approach to Right to Buy fraud and abuse is woefully weak,” he told Inside Housing.

Giles Peaker, a partner at Anthony Gold solicitors, is reported in Inside Housing saying that he had come across cases where companies provide funds for a tenant to carry out Right to Buy. But after the company took control of the property, the tenant was evicted.

He said: “It is usually people who are in desperate need of money or who are quite vulnerable who are particularly encouraged into these deals.”

Inside Housing’s investigation showed 721 of the 4,538 sales made by the 10 local authorities were to tenants on housing benefit.