Solicitor Mari Knowles and barrister Justin Bates have offered their services pro bono to leaseholder Michelle Baharier who is fighting a £24,000 Upper Tribunal case against a QC.

The lawyers, who are both working on the leasehold reform agenda at the Law Commission, stepped in after reading the case on the LKP website today.

Michelle Baharier, who bought her flat as a right-to-buy, won her case as a litigant in person after Southwark Council spent out £1 million to enhance the heating system at the Gilesmead site in Camberwell.

“I am motivated by the sheer injustice involved in this. A litigant-in-person leaseholder should not be fighting an appeal against a QC in the Upper Tribunal.”

The involvement of Justin Bates will confuse leaseholders: he has previously been reviled for fighting against right to manage applications from some of the leasehold sector’s least savoury freeholders.

Housing staff at Southwark Council failed to persuade the First Tier Tribunal that Miss Baharier should pay up.

It has now decided to deploy the services of Philip Rainey QC, one of the leading figures in landlord and tenant law.

If Miss Baharier loses the case, she will very likely face devastating legal costs awarded against her.

This reduces the justice of her case to a high risk game of roulette.

In a further irony, Mr Rainey has spoken several times at LKP events urging the case to reform leasehold laws.

Philip Rainey QC: Are we creating homes or an investment asset class? 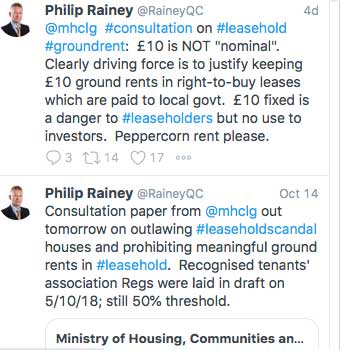 He has also indicated his strong support to set new ground rents to zero, disagreeing with the government’s “nominal” £10 a year proposal which maintains speculators’ income streams in ordinary families’ homes.

LKP has urged Southwark to mediate the issue, in correspondence copied to local MP Harriet Harman, the Communities Secretary James Brokenshire and the MP patrons of LKP, who are also the chairs of the APPG.

We wholeheartedly applaud Mari Knowles and Justin Bates for offering their services to assist Miss Baharier.

Southwark announces new bills … and no funds for leaseholder group