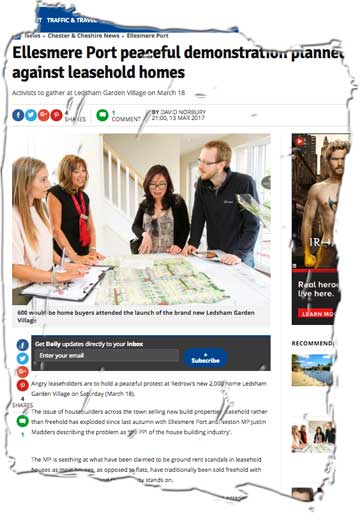 This Saturday leaseholders will stage a two-hour demonstration outside the sales suite of Redrow’s Ledsham Garden Village in Cheshire where the builder is flogging leasehold houses.

The proposed action is reported in the Chester Chronicle here

The protest has been organised by the Facebook group the National Leasehold Campaign, whose 2,300 membership is mainly from the North West.

The demonstration will be attended by local Labour MP Justin Madders, and Sebastian O’Kelly, trustee of LKP, will also attend.

The demonstration is prompted by fury at plc housebuilders building leasehold houses with onerous ground rents throughout the North West.

Many are former customers of Taylor Wimpey, which built leasehold flats and houses with doubling ground rents between 2007 and 2011.

These predatory ground rent terms have trashed the resale values of these properties and made them unsellable, evidence suggests.

Taylor Wimpey is currently undertaking a “review” of the scandal, and will report in April (although this date has been shifted twice so far).

LKP estimates that around 45,000 leasehold houses have been registered over the past five years.

Every year between £300 and £500 million of freeholds are sold off by housebuilders.

Many freeholds have been sold to murky investment groups such as Adriatic Land and E&J Capital Partners that hide their ultimate beneficial ownership behind nominee directors. Vincent Tchenguiz is also a buyer, with his interests controlled by the so-called Tchenguiz Family Trust, based in the British Virgin Islands.

HomeGround, the ground rent management company controlled by Will Astor – David Cameron’s (half) brother-in-law – has admitted it manages freeholds that are owned offshore.

Redrow is no stranger to the leasehold game, but it shares that in common with every other housebuilder.

It has been happily building leasehold houses in the North West because it has got away with it, and everyone else does, too.

The Chester Chronicle quotes Redrow spokesman Matt Grayson saying: “We sell new houses on a leasehold basis in pockets of the country where it is commonplace.”

What this translates to is: consumers have not kicked off about it, until now.

The North West has a considerable legacy of leasehold houses from industrial times and this has lulled homebuyers into thinking that a leasehold house is not an extraordinary and dubious proposition.

Well, thanks to the extraordinary greed and stupidity of a previous generation of Taylor Wimpey management creating ground rents that cripple resale values that situation has changed.

The North West is now the epicentre of leasehold activism, where predominantly young women – wives and mothers trying to make a home – have now mobilised and said enough is enough.

Anyone with historical curiosity knows that when the women start to move – Winter Palace, the Bastille – things tend to change pretty fundamentally.

Does Steve Morgan deserve a demo on Redrow’s doorstep? 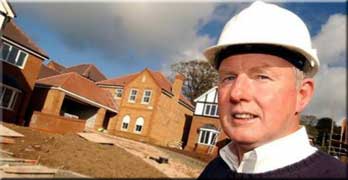 Yes, Redrow may be thought to be shafting its customers at Ledsham Garden Village by playing the leasehold angles. Yes, it has high ground rents at its fancy flats at, for example, Kingston Riverside.

So far, so developer wideboy, and no different to any other housebuilder presented with leasehold’s opportunities in England and Wales.

But, to be frank, I would much prefer to demonstrate outside a Taylor Wimpey sales office: it is the company which turned this graft into a major scandal with doubling ground rents.

Or Bellway, whose CEO is the gormless Ted Ayres, who is bellowing to anyone who listens that there is no leasehold house scandal.

Or Persimmon (in which I have a shareholding), whose cowardly CEO Jeffrey Fairburn has said not a whisper about leasehold houses, yet prattles sanctimonious nonsense about engaging with “stakeholders” it the annual report.

Persimmon has spread wealth-eroding leasehold houses all over the country, wherever the opportunity has presented itself.

Redrow’s founder chairman is Steve Morgan, who is in a different league to the spear-carriers-turned-CEOs who run many of the other housebuilding firms.

The only person of comparable stature is Tony Pidgley of the Berkeley Group, which builds fancy Thamesside apartments in London.

He kept an 8 per cent stake, but largely missed out on the deleterious property frenzy of the next eight years.

Then came the crash, which saw Redrow looking at a £200 million loss, at which point in 2009 Morgan returned to the company.

“I just couldn’t see what had taken me 25 years to build up destroyed,” he said. “I’d been through recessions before and I knew what to do and what not to do.”

By June last year, Redrow was posting profits of £240 million on sales of £1.4 billion.

Last month, Morgan gave £200 million of Redrow shares to the charitable foundation that he set up in 2001. This equates to 11.4 per cent of Redrow.

It goes to the Morgan Foundation, which has already committed £35 million to charitable causes in North Wales and the North West.

If the Morgan Foundation wishes to make a donation to LKP, which is a registered charity, we would be delighted to accept it.

So, yes, I will be outside the sales office at Ledsham Garden Village on Saturday, but I would far rather be outside the offices of some other housebuilder.

Does Steve Morgan deserve a demo on Redrow’s doorstep?