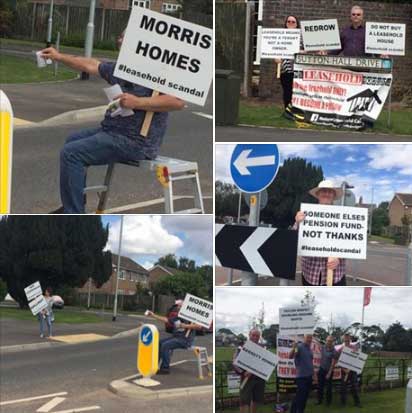 The National Leasehold Campaign Facebook group, now more than 6,000 strong, staged another demonstration at the weekend in protest at the ground rent scandal.

The even took place outside a development of Redrow leasehold houses in Ellesmere Port, the same site of the demonstration in April:

The event was organised by Cath Wlliams, who runs the campaign with Katie Kendrick.

Local MP Justin Madders, who is research offshore ownership of freehold interests, was understood to be present.

Redrow’s only excuse for building leasehold houses in the North West is that the locals there are used to them.

But there is a huge difference between a factory era terraced house paying £3 a year ground rent and the toxic conditions and charges in new-build leasehold houses.

Steve Morgan, founder of Redrow, is understood to be the director of freehold owing companies, and not all of them Redrow’s.