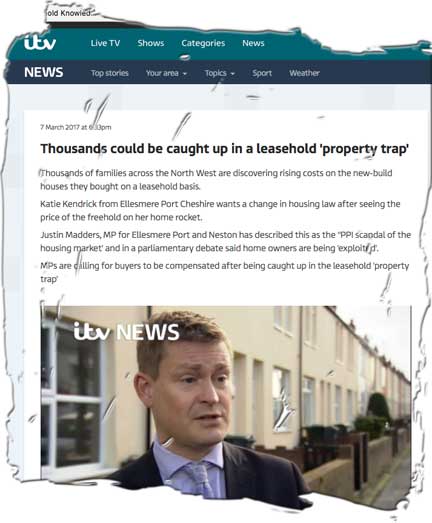 The item, broadcast on March 7, precedes increasing militancy from caught-out leasehold homeowners, some of whom cannot now sell their houses because of onerous ground rents.

On March 18 a demonstration is planned by the National Leasehold Campaign Facebook group outside the sales suite of a national housebuilder building 2,000 leasehold houses in Ellesmere Port.

On March 22, the All Party Parliamentary Group on leasehold reform will meet. Among the speakers will be leaders of the National Leasehold Campaign, which has 1,700 members. ~In addition, the meeting will be addressed by Labour shadow housing minister Ruth Cadbury, and Labour MP for Ellesmere and Neston Justin Madders.

The ITV report can be see here

“Thousands of families across the North West are discovering rising costs on the new-build houses they bought on a leasehold basis.

“Katie Kendrick from Ellesmere Port Cheshire wants a change in housing law after seeing the price of the freehold on her home rocket.

“Justin Madders, MP for Ellesmere Port and Neston has described this as the “PPI scandal of the housing market’ and in a parliamentary debate said home owners are being ‘exploited’.

“For four years Taylor Wimpey sold leasehold properties with a double ground rent clause every 10 years. They have now stopped that practice.

“In a statement they said:

“We understand our customers’ concerns and are actively reviewing these leases, which we stopped using on sites commenced after 2011 as a result of changing economic conditions and outlook.

“Our priority is to ensure that we do a full and thorough review for our customers and we are seeking to understand how we may be able to help them.

“We have committed to coming back to customers who have this type of lease and who are part of our review by the end of April.”

Taylor Wimpey had said that its “review” would be complete by end of March.