Donate
You are here: Home / Latest News / Scandal makes Ground Rents Income Fund plc fall £6m since March but … it has paid out 40.6% in three years 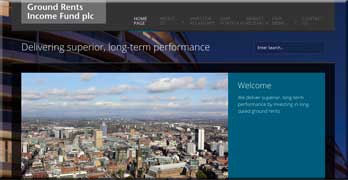 The Ground Rents Income Fund plc has fallen in value by as much as £6 million since March owing to “recent media attention” on the ground rents scandal (see report below).

The £124 million fund almost certainly fell further on the announcement of Sajid Javid, Communities Secretary, earlier this week that he was going to ban leasehold houses and reduce ground rents to “as low as zero”.

Over the past three years, shareholders in the Ground Rents Income Fund plc have received returns of 40.6 per cent.

It interim report says the “of company’s wider portfolio of doubling ground rents, which represents 18 per cent of the portfolio capital value, the directors believe that the valuation may now be lower, based on recent market sentiment, by approximately £5.5 to £6 million.”

“As a consequence, some institutional buyers have withdrawn from bidding from any form of doubling ground rent assets and pricing has weakened accordingly.”

The Ground Rents Income Fund plc features in the article of David Byers in his Times article today.

Builders accused of mis-selling new homes are braced for legal claims worth millions of pounds after locking buyers into leases with spiralling ground rent charges. Sajid Javid, the communities secretary, this week announced plans to ban homebuilders from selling new houses on a leasehold basis.

It included a comment from from Monica Tapes, of Cantor Fitzgerald, saying that Sajid Javid’s crackdown might make existing freeholds more valuable.

Full marks for corporate flag waving and getting the company name in The Times, but the kind of scrutiny that these dubious incomes streams are now likely to receive is more likely to depress values further.

LKP is braced for a PR pushback saying pensions are endangered if ground rents are reformed.

It is unlikely an enterprising PR will attempt to defend the interests of the anonymous investors who hold these assets offshore.

He does not appear on any rich list but he has built a property empire that rivals that of the Duke of Westminster. Companies controlled by James Tuttiett, aged 53, have quietly snapped up the freeholds of tens of thousands of houses and flats in almost every city in Britain, which are now at the centre of controversy over spiralling ground rents.