Donate
You are here: Home / News / FirstPort / Little warmth in this masonic handshake as Peverel website removes news of winning a new block 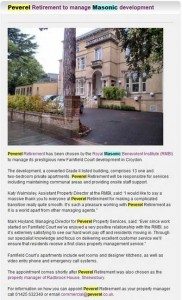 On the day the Office of Fair Trading announced its findings into the Cirrus scandal, Peverel Retirement declared it had won a new client: the Royal Masonic Benevolent Institute.

Peverel would be taking over the management of the 13-flat Farnfield Court in Croydon, south London.

The beleaguered property management – which has lost all its prime riverside sites in London and has been dumped by Berkeley Group, Barratt and its old benefactor McCarthy and Stone – slapped this triumph on the company’s website.

For some reason, it has now been removed and a chill has descended.

“We were completely unaware of the price-fixing issue involving Peverel, and did not know about its reputation,” says an RMBI employee. “We will certainly be keeping a close eye on the service charges.

“Also the contract is only for a year and will be reviewed before it is renewed. I do not know why the notice is no longer on Peverel’s website.”

This is a marked change of tone compared with Peverel’s news announcement in December.

Then Mark Hoyland, MD of Peverel Property Services, said: “Ever since work started on Farnfield Court we’ve enjoyed a very positive relationship with the RMBI, so it’s extremely satisfying to see our hard work pay off and residents moving in.”

Peverel: a lot of resigning

Pensioners trapped by broken lift in Peverel block make BBC news … and it has happened FOUR times before in the past TWO years!