Both Long Harbour and debt collectors JB Leitch hit reverse gear after a forfeiture threat to an £800,000 flat over a late £400 ground rent bill was raised publicly by the Leasehold Knowledge Partnership.

Millie Li, a Chinese citizen, visited China in November last year and failed to pay her £400 ground rent before returning in March.

The £400 ground rent should have been paid in January.

She returned to find her flat under threat of forfeiture, and her mortgage lender, the Bank of China, was also warned by JB Leitch on May 13 [below]: “Note that your security is at risk should a possession order be obtained.”

The case is a stark warning to thousands of foreign owners of English leasehold properties – and their banks – that flats worth hundreds of thousands, or even millions, are at risk of being lost in entirety owing to lease forfeiture over relatively small unpaid debts.

Ms Li contacted the Leasehold Knowledge Partnership because neither Long Harbour / HomeGround nor JB Leitch would discuss what she considered to be excessive fees in reclaiming the debt.

In total these were:

On May 21, JB Leitch acknowledged that Ms Li had paid the outstanding ground rent.

“This part payment is not considered full and final settlement of the matter. In order to settle this matter, you are required to pay our Client’s administration fees and the legal costs …

“To clarify, after allocating the aforementioned payment of £400.00, the remaining costs outstanding total £2,500.00.”

When Ms Li contacted LKP our advice was immediately to pay the outstanding amount in full, and then seek a tribunal ruling on the reasonableness of the legal costs.

In correspondence copied to LKP’s patron MPs and the Communities Secretary James Brokenshire, LKP director Sebastian O’Kelly raised the issue with both Will Astor, the CEO of Long Harbour, and JB Leitch.

Sir Peter Bottomley twice asked them to do so, meaning that the following questions were not answered:

“If there is a problem, please ask the debt collectors to contact me for a direct conversation.

“I would want to quote their explanation of their approach and their costs.

“If they are acting on your instructions on process, I would wish to represent accurately your explanation.”

LKP questioned whether JB Leitch receives any payment from Long Harbour for pursuing this debt, or whether it is remunerated from whatever fees it loads on to the case while doing so.

LKP questioned whether this meant the debt collectors were remunerated for dealing with the matter aggressively.

Long Harbour was asked how this form of debt collection serves the long-term interests of a harmonious relationship between freeholder and leaseholder.

Long Harbour was also asked whether it believed this manner of debt resolution accords with the Code of Practice of freehold owners endorsed by Mr Brokenshire and signed by Long Harbour.

In addition, the freehold owner is Adriatic Land 5, based offshore in Guernsey, where the ultimate beneficial ownership is hidden.

Therefore had Ms Li’s property been forfeited over this matter, she would have lost her home, and the Bank of China would have lost its mortgage, to beneficial owners who have chosen to remain secret.

Long Harbour was asked whether the anonymity of beneficial freehold owners, common to Long Harbour freehold assets, is in the spirit of the Code of Practice endorsed by the Secretary of State.

LKP has been informed by Long Harbour’s lobbyist / PR helpmeets – as have media organisations – that the majority of Long Harbour freehold owners are UK pension funds.

Long Harbour was asked whether the Adriatic Land 5 freeholds belonged to pension institutions based in the UK and, if so, why is the company registered offshore and the beneficial ownership hidden?

Last week, JB Leitch contacted Ms Li and “as a gesture of goodwill” halved their fees:

“We note your comments in relation to legal fees and we maintain that the entirety of our client’s legal fees were reasonably incurred and reflect the level work undertaken on their behalf.

“Our client’s legal fees in these matters are regularly scrutinised and approved by judges during proceedings and it is entirely reasonable that our client recovers their costs in these circumstances.

“As stated in our email of 30 May 2019, our client does not look to profit from forfeiting a property which is evident from the existence of their ‘no windfall’ policy ensuring any and all proceeds realised as a result of residential forfeiture are returned to the resident or other entitled beneficiary after any debts and costs have been discharged.

“As indicated in our email of 30 May 2019, and in light of your undertaking to pay future ground rent sums as they become due, our client has instructed us as a gesture of good will to issue a partial refund to you of £1,000 of the legal costs previously paid.”

There is no question that Ms Li wrongly failed to pay the ground rent she had undertaken to pay when she signed the lease with legal advice.

HomeGround had told her on November 13 that the ground rent was due in January.

It was thereafter that the matter was passed to JB Leitch, which issue a claim for possession of the property on May 3 and contacted the mortgage lender the Bank of China on May 13.

Ms Li wrote to LKP after the dispute was resolved:

“My deepest gratitude goes to all of you who have provided me legal advice and supports when I desperately needed them the most.

“The legally legitimate claims that demand horrendous amount of legal fees have been nightmares for many leaseholders, as hiring a solicitor to fight the cases or representing on the court cannot be a win, given the high costs and efforts put in.

“Many of them including myself had acknowledged the negligence, but been struggled to accept the unfairness for the legal fee. I cannot thank you all enough for defending the leaseholders and facilitating in improvement of the system. Best Wishes, Millie” 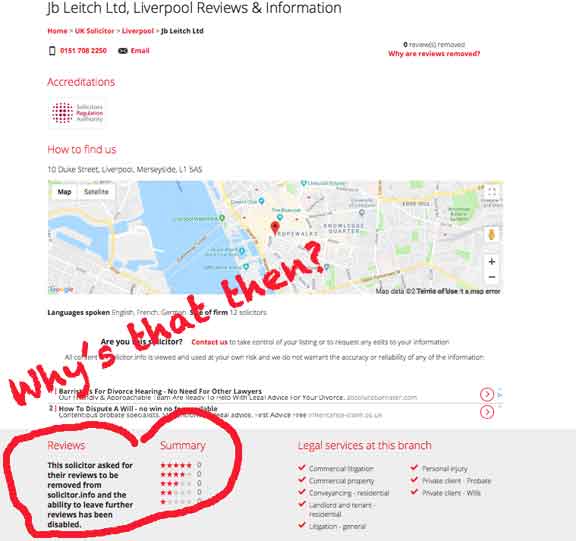 How JB Leitch just cannot resist the F-word … for forfeiture

Barking fire site is owned by anonymous investors in Adriatic Land
Next Post: Will CMA investigation at last give cheated leaseholders the chance to sue plc house builders?