The behind-the-scenes concern of senior politicians over managing agent Joseph Gurvits broke into the open yesterday when he was named in the House of Commons.

Gurvits was named – without comment and together with Peverel and Tchenguiz – in a brief intervention in the rental housing sector debate yesterday by Sir Peter Bottomley, MP for Worthing West, who is concerned about the treatment of pensioners at two retirement developments in Plymouth.

Residents at Elim Court and Regent Court are locked in Leasehold Valuation Tribunal disputes with Gurvits, who is deploying the legal means available to frustrate their attempts to exercise their right to manage.

Housing Minister Mark Prisk replied: “I will look into those cases very carefully—I am aware of them—” but he would not intervene in the judicial process in LVTs.

Sir Peter made his intervention in the House immediately after attending a meeting of the Association of Residential Managing Agents at the British Property Federation. The meeting was to discuss ARMA-Q, the new more rigorous regulatory scheme for the association.

Curiously, Gurvits’ Y and Y Management company, which manages the Plymouth sites, is a member of ARMA, while Eagerstates, his property management company familiar to London leaseholders, is not. The freeholds of the Plymouth sites are owned by Avon Freeholds, which shares the same offices as Gurvits in Edgware, North London. It is owned by his associate Israel Moskovitz.

Local Tory MP Oliver Colvile is also poised to raise issues surrounding Elim Court and Regent Court in the Commons, and will be meeting residents at the sites on February 2. 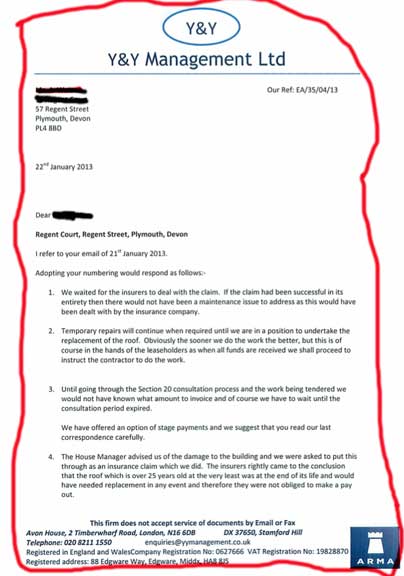 The residents at both sites – there are 34 flats at Elim Court and 39 flats in Regent Court – are in a state of stress and anxiety as a result of their disputes with Gurvits.

Last week residents at Elim Court lost their third attempt at right to manage and were informed that Gurvits’ costs in fighting the action, for which he employed a senior leasehold barrister, were £12,688. He would be entitled to claim the sum from them if the costs were determined payable by an LVT.

Nearby Regent Court won right to manage in February last year, but Gurvits launched an appeal against this decision to be heard on April 18 – a full 14 months after the original decision.

Meanwhile, the roof at Regent Court, which appears not to have been covered by insurance as it was at the end of its practical life, was badly damaged in a storm and residents must pay up £140,000 for a replacement by tomorrow (January 25).

Gurvits’ Y and Y Management carried out a section 20 consultation, but residents are demanding to know why the building’s roof was not covered by the insurance and, because of the impending decision on right to manage in April, have asked that this money be placed in a third party account controlled by a solicitor who can pay the contractor.

In a letter to Gurvits that was copied to MPs, Campaign against retirement leasehold exploitation, LKP, AgeUK and ARMA – the trade body to which Y and Y Management belongs – the residents said:

In a letter of reply to residents dated January 22, which was send to LKP and is reproduced below, Gurvits denied that his company allowed the building to deteriorate and stated that both Y and Y Management and the previous managing agent had arranged repairs to the roof.

He rejected the suggestion that the money be held by a third party, adding that failure to pay the amount by the January 25 deadline will result in action at LVT, with further costs to residents.

Gurvits says: “With respect, the landlord is entitled to defend the RTM just as you are entitled to bring the action and it is now for the Lands Tribunal to decide the case. I have not left your building to deteriorate, I have been continually doing temporary repairs to it to constantly to [sic] keep it watertight and I am in constant communication with your House Manager almost on a daily basis in this regard to ensure that it remains watertight.”

It is understood that the residents have now paid the money to Y and Y Management. They claim that the sum raised is £107,474.10, with the remainder in the contingency fund. It means each one-bedroom flat pays just under £3,000 and each two-bedroom flat pays just under £4,000. Commission for Y and Y Management and for a surveyor are included in the total bill of £140,000.

Meanwhile, the pensioners at Elim Court are considering their options after their latest right to manage defeat.

In a letter to residents of January 16, Elena Andreadis, of Y and Y Management, included all the invoices of those involved in fighting the action, which total £12,688.44.

The invoices show Gurvits charging his time at £1,200 for the full day’s hearing (plus £300 travel and £150 for accommodation). The charge for Elena Andreadis was £800. The Y and Y Management bill to fight the Elim Court right to manage totals £3,630 (including VAT).

Barrister Justin Bates charged £2,400, and the remainder were bills from Gurvits’ solicitor, Conway and Co in Henley-on-Thames.

After warning the residents that these costs may be determined payable by an LVT, Andreadis appears to indicate her preparedness to negotiate if the pensioners abandon their right to manage.

“Please note that I am happy to come and discuss a resolution to the issue of RTM so that we can continue to manage your building without the acrimony that I know is distressing many of you. I am also happy to discuss any concerns you have in relation to these outstanding costs.”

“Most of you I know wish to live in peace and not spend years in court fighting with us.”

Gurvits has appeared before LVTs many times, and in February 2010 was rebuked by a tribunal for sending “a series of abusive emails” to an applicant.

In March 2011, Y and Y Management was criticised by a tribunal in the following terms:

“With regard to Y & Y the tribunal felt that there was a total lack of transparency about the identity of the lessor and the company or companies which were responsible for managing the property and insuring it. The tribunal can sympathise with Mr Williams’ (a leaseholder) comment that he is “caught in a complete weave of companies”.

Gurvits and Y and Y Management have given their views concerning Elim Court and Regent Court in its letters of January 16 and 22.

Nonetheless, LKP is prepared to publish any additional statement from Gurvits concerning these issues, or any matters raised in this article.

The full letter of Y and Y Management to the residents at Regent Court of January 22, which was copied to LKP, can be read here