Donate
You are here: Home / News / Newcastle leasehold house owners stuff attempt by Barratt and Keepmoat to sell their freeholds 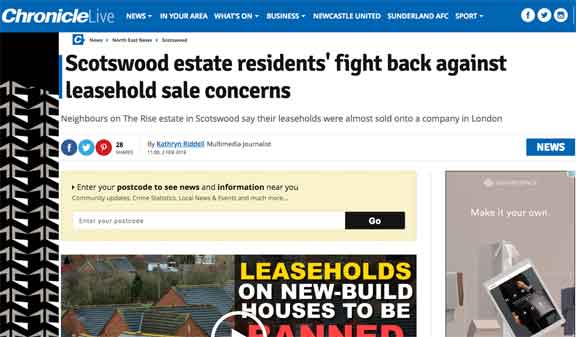 Leasehold house owners in Newcastle have stuffed a plan to flog off their freeholds to speculators by Barratt and Keepmoat – both of who are prominent in the leasehold houses racket.

The New Tyne West Development Company (NTWDC), a partnership of Newcastle City Council and developers Barratt Homes and Keepmoat, said they stopped the sale of freeholds at The Rise, Scotswood, in response to national concern.

The story is reported in the Newcastle Chronicle here:

Neighbours on a new build Tyneside estate say they had to fight to stop their leaseholds being sold onto a company in London. Homeowners on The Rise in Scotswood say the land beneath their houses was almost sold on to the third party without their knowledge.

Lee McGray, development director at NTWDC said: “Like many, similar development projects in the UK, the land on which homes are built at The Rise remained leasehold. In this case it is owned by the partnership delivering the project – the New Tyne West Development Company (NTWDC).

“As with other projects in Britain, we considered selling on the leasehold land to a third party. However, in response to issues raised around leasehold sales nationally, we reconsidered this and decided that it would be fairer to offer our clients the opportunity to purchase the freehold themselves, directly from NTWDC. This applies to new buyers and existing home owners.

“So, we wrote to leasehold residents, offering them the opportunity to buy the freehold. They are under no pressure or obligation to do so but if they do wish to purchase they can do so now, or wait for the anticipated guidance on leasehold from the government.

“To date, just over half have indicated that they do wish to make the purchase. If they go ahead, this will be a full and final sale of the land.

“Those who remain as leaseholders will continue to be charged an annual ground rent, which is fixed until 2039, after which it would be subject to a Retail Price Index linked review. They can be assured that NTWDC will put their interests first when reconsidering the policy on leasehold.”

The Rise is a £265 million development involving Newcastle City Council and developers Barratt Homes and Keepmoat.

The second phase of the development is currently under way, with 1,800 homes planned in total.

Justin Madders delays Leasehold Reform Bill and calls on the Government to provide justice for leaseholders
Next Post: Leasehold Roadshow heads for Leeds on February 27