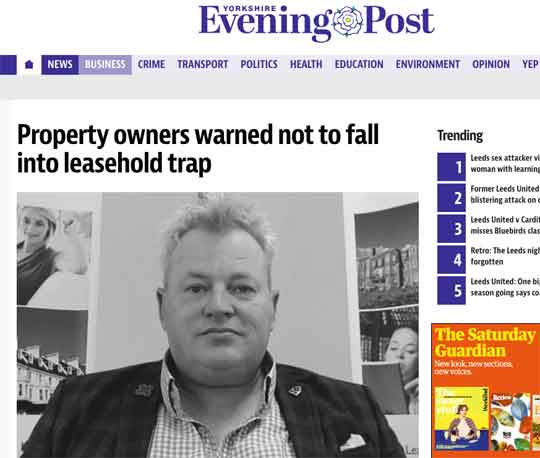 The Leasehold Roadshow, which has made several tours of the North West, is heading for Leeds on February 27.

The Leasehold Roadshow will be held at the Mercure Leeds Parkway Hotel, Otley Road, Leeds LS16 8AG from 10am to 6pm on Tuesday, February 27.

The Leasehold Roadshow is coming to Leeds! Due to popular demand, we will be running free drop-in sessions with our experts throughout the day, as well as offering the opportunity to attend presentations by our leasehold experts on a range of issues that, as the owner of a flat or leasehold house, you might well be facing or may face in the future.

The show is an invaluable explanation of the real workings of leasehold – and how to get the better of a system heavily weighted against you.

The speaker is Louie Burns, of Leasehold Solutions, who is the only leasehold sector insider who publicly says it is a racket.
LKP routinely refers leaseholders to Mr Burns, and the associated legal company Leasehold Law, headed by Mari Knowles.

Although a host of commercial interests have sought to leap on board the leasehold reform bandwagon, Louie has been articulating the scams in leasehold for a long time.

It was a comfort to LKP that we were not entirely alone.

“Leasehold is a complex area and it can be very difficult for owners of flats and leasehold houses to get access to the information they need to defend themselves.

“That’s why we’re bringing the Leasehold Roadshow to Leeds, to provide these property owners with free, impartial legal and valuation advice to help them take back control of their property.”

“We see many cases where flat owners get exploited by unscrupulous freeholders, who raise their ground rent and service charges, or offer them informal lease extensions, where flat owners end up with no legal protection whatsoever,”

Property owners warned not to fall into leasehold trap

UK’s leading enfranchisement specialist decries government action as ‘incredibly weak’ and urges leaseholders to know their rights Leaseholders are being urged to know their rights and defend themselves against ‘underhand tactics’. In the wake of the leasehold scandal, Leasehold Solutions is holding a public information event in Leeds on February 27 to allow homeowners to ‘take back control’.

Newcastle leasehold house owners stuff attempt by Barratt and Keepmoat to sell their freeholds
Next Post: FirstPort Retirement is allowed into ARMA